Despite a difficult business environment, demand for aerial platforms in India in the last year has been fair, led by purchases of new and used equipment. Partha Pratim Basistha reports from the country.

The Indian access market is being confronted by multidimensional challenges. This includes the negative impact of a general slowdown in the Indian economy, led by slower industrial output and consumption, resulting in curtailment of production capacity expansion plans. Investment in new products has become more difficult with less funding available from state managed banks and other financial institutions. This follows a directive from the Central Reserve Bank, to stop the further creation of nonperforming assets and higher levels of inflation.

The other challenges include late payments to MEWP rental companies from their customers, mainly from infrastructure projects, which have restricted cash flow from their owners, putting pressure on their own reserves. The woe has been added to by the recent Coronavirus (COVID-19) scare, which will likely have a negative business impact in the coming next months.

However, given the fundamental long-term positive demand, interestingly, the indications are that a sizeable number of rental buyers will make major purchases to replenish stock and for fleet expansion.

The level of this investment in new and imported used equipment will come down to market evaluation by the rental companies, which play a dominant role in the market, led by the big tier-1 and medium sized tier-2 rental companies. 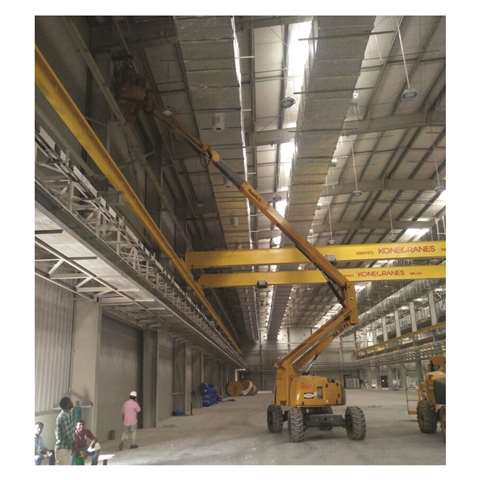 According to the Indian MEWP industry estimates, the size of the market is likely to be close to 400 units during 2020, similar to 2019, characterised by scissor lifts and self propelled, telescopic and articulated boom lifts. While there will be acquisitions of new equipment by rental companies catering to the requirements of premium customers, the market will also remain skewed towards imported used equipment.

Competition will also grow with the entrance of new rental companies, like Sudhir Power, with deep pockets, entering the market.

According to figures obtained by Access International, there were imports of 320 new electric and diesel scissor lifts to rental companies in India during 2018-19. These orders comprised of 15 Genie machines for Eastman logistics; 44 JLG units for Manlift; 18 Dingli and 42 Runshare machines to Mtandt; 12 Genie units to Reach International; 30 Haulottes to Rentease; four Haulotte machines to Shakti Equipments; While new entrant Sudhir Power has imported 34 Genie and 38 JLG scissor lifts.

Speaking to AI, T Mohanraj, the head of TV, Sundaram Iyengar & Sons, dealer of JLG and Palfinger knuckle boom cranes for the South and East India market, said, “Slowdown in production by India’s automobile industry has curtailed demand for MEWPs in the Southern India state of Tamil Nadu, one of India’s major automobile manufacturing hubs, by 50% from mid-2019, compared to 2018. Large numbers of manufacturers have been cutting down production shifts drastically, meaning they are not requiring regular shut down maintenance for the plants. Led by this situation, many AWP rental companies have aborted buying new equipment for long term annual maintenance contracts with the automobile manufacturers.”

India’s automobile industry, which sustained a high level of buoyancy in the very recent past has been a major driver for AWPs. This has been both for regular plant maintenance and construction of newer plants. The very recently commissioned KIA Motors plant in South India required 250 plus units. This consisted of a mix of articulated, telescopic boom lifts and scissor lifts with varying heights ranging 45ft, 65ft, 85ft and 125ft during its construction.

“Orders for our machines across projects involving construction of factory buildings and general infrastructure has been at a slower pace from the contractors. Based on present demand, we are treading cautiously before planning fresh purchases in the near future,” said Sagar. S. Gadodiya, director, Shakti Equipment – a Mumbai-based, mid-level AWP, crane and telehandler rental company. It owns a fleet of close to 150 units between 8ft and 135ft working height, mostly consisting of Haulotte units. Some 65% of the company’s equipment was purchased new, while the remaining units are of older origin.

XCMG has delivered close to 70 new AWPs to Indian rental major Mtandt Group between 2017 and 2018. This consisted of boom lifts between 20m and 26m, and scissor lifts. According to Rakesh Modi, chairman of Mtandt Group, “We see positive demand from end users in the long term. There is the prevalence of very tough competition from used imported equipment procured by disorganised, small rental companies, catering to segments of the market with less exposure to safety considerations and optimum product performance.”

Modi continues, “However, on a much more positive note, there is demand for well-maintained equipment, backed by proper product service support, as well. Taking cognizance, we are planning to add another 100, both new and second hand imported equipment, in 2020 to our existing fleet of 750 units of 40ft scissor lifts to 185 articulated and telescopic boom lifts. Presently, we are evaluating the brand of machines to be brought into the fleet.” Mtandt’s existing fleet consists of equipment from JLG, Genie, XCMG, Dingli and LGMG.

Gadodiya, at Shakti Equipments, adds, “Despite the current demand situation, the mid and long-term potential looks quite promising as business enquiries remain quite active. Based on these, we are planning to introduce additional new equipment above 100ft to our fleet. This would consist of a mix of articulated and telescopic boom lifts. However, we are studying the market strongly, by trying to understand the customers’ priority on safety or the rates they would be willing to offer and also the types of equipment they would be interested in. This preparedness will enable us to have the right return on investments in the highly competitive Indian market.” 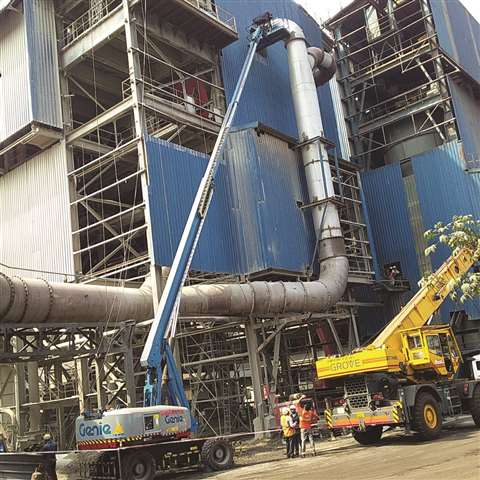 Dharak Dedhia, director, Aria Aerial Platforms, a Mumbai-based major AWP and crane rental company, acquired 25 new Genie boom lifts, including its new Xtra Capacity (XC) machines, from 2019 through to March 2020. The equipment consists of articulated boom lifts and telescopic boom lifts between 60ft, 85ft, 125ft and 180ft. “These new generation boom lifts have additional capacity compared to the older generation, thus enabling us to offer machines with higher levels of productivity. The new acquisition has enhanced our holding to 130 units, also enabling us to offer a broadened product offering. We have been deploying the equipment across various segments like refineries and steel plants.”

Concurring Modi’s claim, Dedhia continues, “There is the presence of hirers looking for newer equipment, with safe operations and premium product support services requirements, like Tata Steel and L&T Infrastructure. We will be increasingly targeting those segments with our equipment.” Aria has recently rented seven units of its newly acquired Genie telescopic boom lifts between 60-125ft to Tata Steel’s flagship Jamshedpur plant in India at Jharkhand State in Eastern India.

Jharkhand-based industrial maintenance services provider, United Air Express has recently placed orders for five brand new JLG self propelled articulated boom lifts between 80ft and 120ft. The company will deploy the machines, imported from the US at Tata Steel’s steel production facility at Jamshedpur and the Kalinganagar and Angul Steel Plant in Odisha state, Eastern India.

According to Kishan Sonthalia, director of United Air Express, “We have preferred to go in for JLG machines due to the right pricing of the products and good product support services.”

Moreover, he adds, the objective of owning units from one manufacturer is to have a more centralised, efficient equipment management system. United Air Express, which entered the industrial maintenance business in 2015, brought its first 150 JLG units from 40ft to 150ft, then. A majority of its AWPs are working at Tata Steel’s three plants in Eastern India. 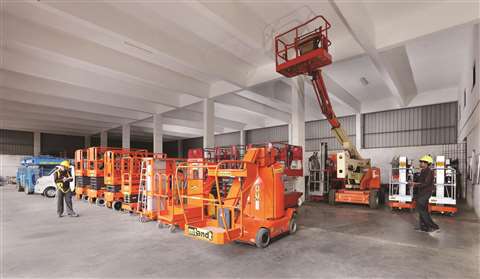 Part of mtandt’s fleet of equipment

To take on the competition and improve profit margins, Mtandt, will be starting a machine refurbishment business in 2021. “This will be a completely new dedicated business, where we will undertake complete refurbishment of the machine structure, electrical and hydraulics components and market them cheaper at 30% to 40%, backed by product warranty.” Says Modi

Vijay Sethi, head of AWP of Mumbai-based Gemini Power Hydraulics is also looking to the changing market. Gemini is exclusive dealers for Palazzani tracked platforms and Italy’s CTE truck mounted platforms and one of Haulotte’s dealers.

“Now we are looking to offer buyback support services to our existing customers and also to potential new customers, where we will take back the equipment from them and offer new equipment. However, while selling new equipment, we will see whether it is viable for the customers.

Service support is also top of the agenda at Maco Corporation India, one of Genie’s dealers for MEWPs in India. Its senior manager Krishna Patel, said, “Since we sell the products mainly to the end users, we will be looking to further strengthen our product support through our four service outlets in India, backed by our skilled services engineers at affordable rates. We stock parts and also import spares within 10 days.” 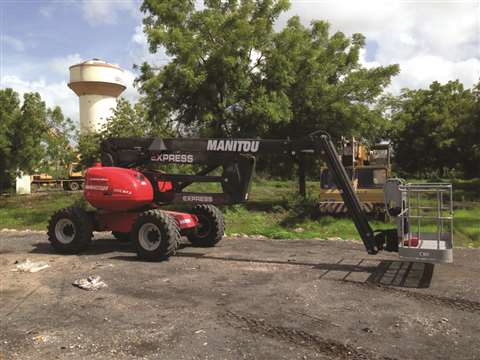 An emerging trend of the Indian AWP market is that rental companies are increasingly purchasing machines with greater working heights, ranging between 125ft to 135ft and 150ft, for industrial maintenance jobs. This is because more stringent environmental regulations have been making power, cement and primary steel plants owners like Tata Steel and Indian State owned Steel Authority of India increase their chimney heights.

Sonthalia says, “Tata Steel is very strict in abiding by environmental regulations. It ensures very stringent maintenance of the plants’ chimneys and also that of the blast furnaces and its adjoining areas, to keep the air quality in check. This is through proper auditing, involving visual inspection, putting up demand for higher working height AWPs meeting the key performance contract criteria, like productivity and safety at an optimum level.”