The data, which show both the proportion of machines working and their utilisation levels, comes from the Downtime Index, an initiative by Trackunit and other partners to publish anonymised telematics information to help the industry track the impact of Covid-19. KHL Group is the exclusive media partner for the initiative and will publish weekly updates on the Index. 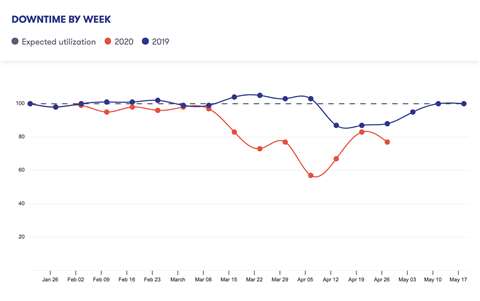 In week 18 (starting Monday 27 April), the number of machines in use was stable from the previous week at around 50%, which is a significant improvement on the 40-45% level three weeks ago and compares to a ‘normal’ level of around 60% in the previous year.

However, utilisation levels – the Downtime Index – fell back last week following two weeks of growth. The Index last week stood at 77, down from 83 and 11% lower than would be expected at this time of the year.

North American machines saw improvements in utilisation for the third successive week, with a downtime index of 87, while machine use in Europe faltered by 9% after two weeks of improvements, falling back to the same Index figure as North America.

Within Europe, the biggest drops were in Eastern and Northern Europe, while utilisation levels in Southern Europe saw a tiny drop, indicating a stabilising or improving situation in Spain and Italy.

Although the most recent data indicates a fall in machine utilisation in Europe, the overall picture is of an equipment industry slowly coming back to life. The Index reached a low point of under 60 at the start of April having been close to 100 in early March. The Index was on track to reach almost the same levels as a year ago, but for last week’s fall.

The Downtime Index, which gets its official launch today (7 May), compiles weekly harmonized engine utilisation changes, with utilisation defined as voltage activity on a machine’s alternator.

The changes are expressed as index numbers to allow for quick international comparisons, with the Index starting at week 4 (January 20 2020), the base week. The underlying data comes from approximately 150,000 off-highway construction machines in Europe and North America, with high populations in France, Germany, Denmark and the US (40% all together). The data includes both rental and end-user owned equipment.

Mathias Frost, Director of Software Products at Trackunit, said the company wanted to do what it could to help the industry through the Covid-19 crisis; “The Downtime Index offers near real time insights for the construction industry at a time when situations are evolving rapidly and differently from nation to nation. We are currently calling for more partners to submit data and contribute to the Index.”

Software company Trifork is a founding partner of the Downtime Index with Trackunit, and KHL Group is the media partner. 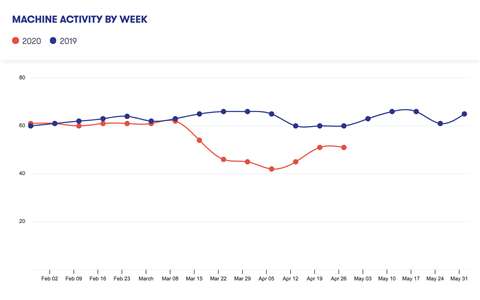