In the current crisis caused by the Covid-19 pandemic, Swiss rental company Avesco Rent appears to be reaping the rewards of having been an early adopter of digital processes.

Avesco Rent is part of the Avesco Caterpillar dealership in Switzerland, which has, in recent years, expanded its territory to include the Baltic States of Lithuania, Estonia and Latvia, as well as Finland – see the box story below for more detail. 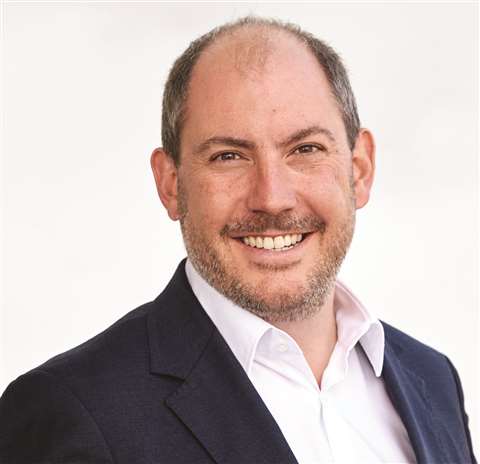 Aside from Avesco Rent’s online rental facility, which is part of the Caterpillar dealership, the company also started up an independent and entirely online platform FastRent in 2014, which is currently only available in Switzerland.

“In 2014, after some reflection, we decided in the group to develop a start-up to try to apply some business models from other industries, such as the flight and hotel industries, using a fully digital solution,” Vincent Albasini, CEO of Avesco Rent, tells IRN.

“Now we have more than five or six years’ experience with the online channel.”

Albasini joined Avesco Rent in 2006 with a background in the financial sector. He went on to become Fleet Manager and then Area Manager for Avesco Rent’s operations in the French part of Switzerland, before replacing Max Rossi as CEO in 2012. Rossie became General Manager of Avesco Rent in Switzerland.

Albasini goes on to say, “Today I am very happy to have decided in 2014 to invest in and launch the online channel because the learnings of the past five years help today because we have made a lot of errors and today that is one of our advantages.” 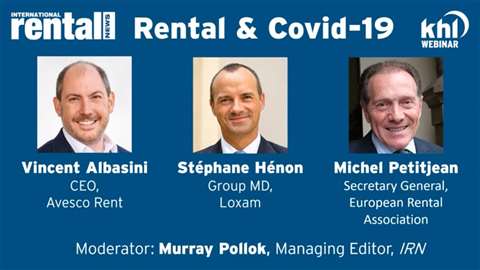 Vincent Albasini was one of three speakers to participate in a Rental and Covid-19 webinar hosted by IRN on 4 May. A recording of the webinar is now free to view on khl.com

He explains that an online channel is not simply a new website; it is a full transaction process whereby customers can book machines and transport, pay online and receive digital invoices, without direct contact with people.

“It’s really important what we have learned in the past few years,” says Albasini. “Develop a platform, develop algorithms, okay, that is the IT you need to invest in and collect the data. But to apply it to the daily business operations, that is another challenge, because that is a change from the traditional channel to the online channel.

“Or when you want to cover both, you need to adapt your processes, and this is perhaps the main challenge. Because, in the end, what is the most important thing is customer experience, whether they decide to use the traditional channel or the online channel. So you need to deliver the same level of customer satisfaction through both channels.”

Albasini suggests that the conservatism of the rental industry, and the construction industry it serves, has meant that adoption rates have been relatively slow. However, during the pandemic, many customers have been forced to make the switch to digital.

“During the last five to six years, the customer was really interested in the online channel,” Albasini says, “But in practice they didn’t really use it, or maybe only for very small contracts in the short term. And now, in the last few months, we have seen that really change, especially in the last few weeks.”

In both Switzerland and the Baltics, Avesco Rent has seen the proportion of rental contracts made online grow from between 35 and 40% to about 50% over the course of the first quarter of 2020, driven by the Covid-19 crisis; “So the customers are changing their habits according to the situation,” says Albasini.

Illustrating the acceleration in demand for online services over recent months, online rental requests for Avesco Rent in Switzerland have increased by 50% over the course of the first quarter of 2020, compared to the equivalent quarter in 2019. Meanwhile, FastRent has seen demand grow by 45% in the first quarter of 2020, compared to growth of 25% in the same period last year.

Avesco Rent’s depots in Switzerland and the Baltic States have all remained open (Avesco Rent is not yet operating in Finland), supplying equipment in particular to critical sectors. But the fact that the company offers an online channel has clearly helped it to continue supporting customers during the crisis, demonstrated by the increased online traffic.

Events companies are an important part of Avesco Rent’s customer base in Switzerland, so this side of its business has taken a big hit as a result of social distancing measures. 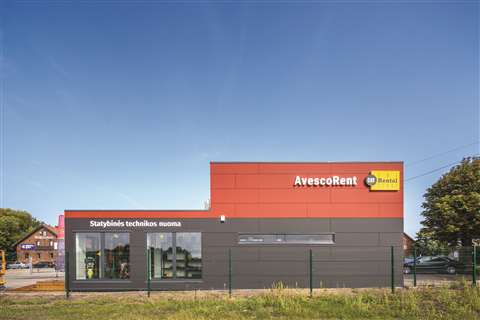 Avesco Rent’s branch in Klaipe·da, Lithuania. The company has so far kept all its depots open throughout the Covid-19 pandemic

He adds that the impact has been felt more strongly in Switzerland than in the Baltics. About 80 to 85% of construction sites have remained open in Switzerland, though, with the French part of the country hardest hit.

Avesco Rent is not the only one to see an opportunity with online rental. Albasini points out that several major rental players in Europe have started developing online rental channels too, but more recently, in the past two to three years; “I see that several new companies or existing players try to go, now, on the online channel. But we feel that we have invested a lot of money over the past several years, because it is a different experience.” This, he feels, gives Avesco the edge.

Despite the challenges of going online with rental operations, there are clear benefits to be had – and not just during a crisis like the Covid-19 pandemic.

“The booking process, the online platform, does the work that a human would usually do – checking availability of machines, negotiation of the price, making the contract, organising the transport, everything. So with the online channel you can save resources; or you can dedicate the resources to explaining how the system is working, managing the processes,” says Albasini, adding that this may change the profile of the staff required.

Another benefit is the speed with which the system can respond to the customer.

“With the traditional channel, you take the order, you need to call the branch maybe to organise the machines and check their availability. Right now, all the information is online and available for the sales force and the customer at the same time, so you save a lot of time,” says Albasini.

One important element of the FastRent platform is the use of dynamic pricing, by which algorithms set prices according to various factors such as machine availability and day of the week. To begin with, only historical data was used to inform the algorithms, but increasingly the system is also being fed real-time data.

“In the algorithms, we’re shifting the emphasis – sometimes you need to put more weight on the historical data, sometimes on real-time data,” Albasini says. “It depends on the situation. So we are increasingly using real-time data and right now we are trying to introduce artificial intelligence to try to start with predictive information.”

Artificial intelligence (AI) requires a lot of data – these large pools of data are referred to as data lakes – and that necessitates collaboration, in order to get new streams of data. One company with which Avesco is collaborating on this front is Italian IT specialist Alias.

AI is still in the test phase, but it is something the company is investing in. 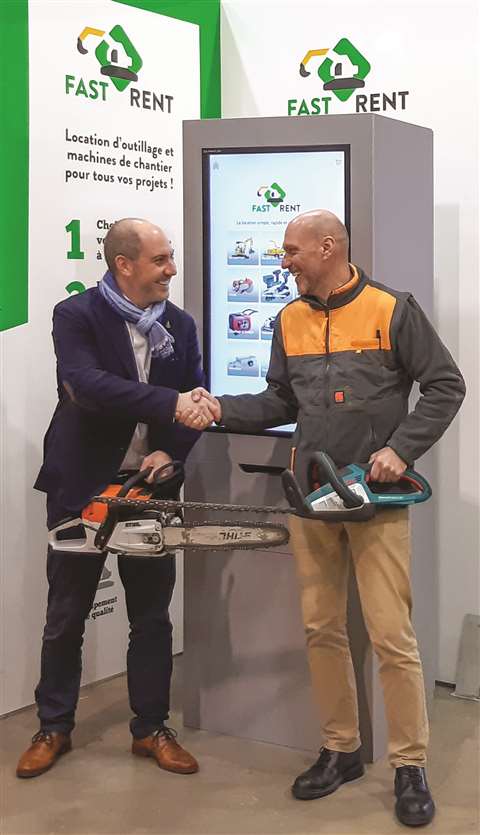 On the subject of collaboration, FastRent recently became the official partner of Hornbach in Switzerland. Hornbach is a Germany-based DIY chain.

“They book the machine, receive a ticket, and for tools they can pick them up at the shop, and for larger machines, such as 3 tonne excavators, they can book the transport for it to be delivered directly to a site.”

When asked if there was a conflict of interests between Avesco Rent and FastRent, Albasini says, “When we started FastRent at the beginning, our employees felt we had created a new competitor, so it was a question. But FastRent in Switzerland is dedicated more to small and middle-sized companies and private individuals.”

Looking beyond the Covid-19 crisis, one big question is whether there will continue to be a shift towards online rental.

“So, I don’t know if adoption rates will continue to increase and grow, but I don’t image that we will drop back from this level of online demand.” 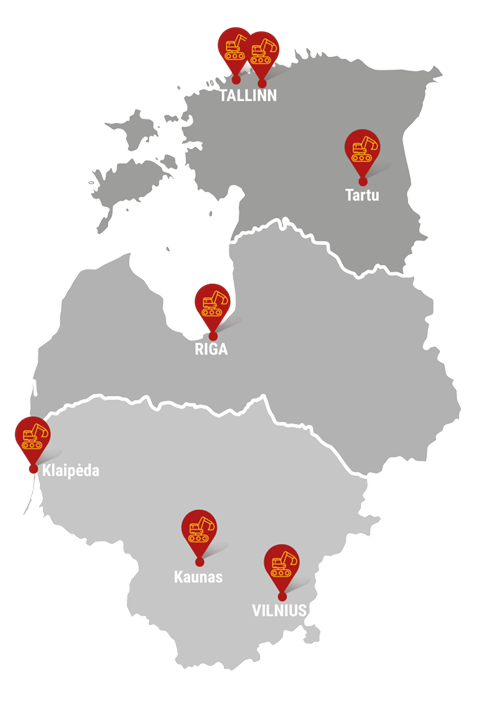 While Avesco’s operations in Switzerland remain its core business, the company took on the Caterpillar dealership in the three Baltic countries of Lithuania, Estonia and Latvia in 2018. This followed discussions with Caterpillar, which has been consolidating its dealer network in Europe over the past five years.

At the same time, Avesco decided to extend its rental operations – through Avesco Rent, not FastRent – in the Baltics, and the first branch was opened in Lithuania’s capital Vilnius, also in 2018.

Avesco Rent now has seven branches in the Baltic States, with three new branches opened only recently in Estonia and Latvia.

While Avesco Rent is a generalist rental company offering a broad range of equipment in its home country of Switzerland, it has a narrower focus on construction machines in the Baltics – though the plan is to grow the product portfolio there.

Then, as of the start of 2020, Avesco also became the official Caterpillar dealer in Finland, taking over from Wihuri on 1 January.

This latest expansion has added 240 employees, nine depots and approximately 250-300 pieces of equipment to Avesco’s business. Although rental is offered in Finland, it is primarily mid- to long-term rental because the fleet comprises mostly of heavy equipment; “It is unlike the rental services offered by Avesco Rent in Switzerland and the Baltics,” says Albasini.

However, the company is currently analysing the market to determine whether Avesco Rent’s business model could be extended to Finland.

“Right now, we are analysing the market because in Finland two or three major players represent a lot of market share, so we had some discussions and analysis of the market,” says Albasini. “So maybe in 2021. It depends on the market but maybe it’s possible to start rental activity as we have in the Baltics and Switzerland.”

As part of a wider strategic vision to digitalise the company that began three years ago, Avesco Rent has transformed its rental depot in Echandens, Switzerland, with the help of data analysis company livealytics. 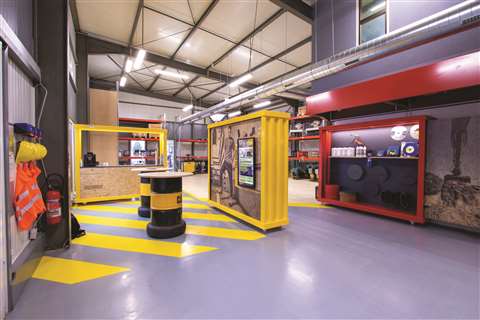 Clotilde Jouette, Marketing and Digital Transformation Director at Avesco Rent – and a member of the European Rental Association’s Promotion Committee and Future Group – says, “We wanted to go beyond mere renovation to redefine the experience.”

With an investment of approximately €50,000, walls were knocked down, a visitor area with a café was created, and touchscreens and tablets were installed. The equipment catalogue is now accessed via large touchscreens and rental returns are made through tablets to simplify and speed up the process.

Jouette says, “It was important for us to know more precisely how our customers behaved in our depot in order to improve their purchasing and service experience.”

In October 2019, livealytics installed five sensors inside and outside the depot. They were focused in three key areas: the outdoor area, the unofficial entrance to the workshop, and the main entrance to the depot. Data stopped being collected at the end of March.

The data shows that customers are now spending more time in the new visitor area. There are also regular customers who used to directly enter the workshop via the back entrance; “They felt at home, which is good, but not so good for safety. Therefore, we closed doors,” says Jouette.

But further to this, the data has uncovered previously unrecognised weekly peaks in visitor traffic. “We have noticed that the weekly peak attendance is not on Monday, as we thought, but on Thursday,” says Jouette. This is valuable information for deciding when to deploy more or less staff.

Avesco Rent is now considering a roll-out of the solution across its network in Switzerland, although this could be a little delayed by the Covid-19 pandemic, according to Jouette.