Kiloutou has begun to introduce ‘clean’ vehicles into its transport fleet, powered by compressed natural gas (CNG) and electricity, as part of its Driv’EKO programme.

The Stralis carrier truck was tailor-made by Iveco, in collaboration with trailer manufacturer CVIM, based on Kiloutou’s specifications

This includes five long-range CNG fueled carrier trucks for large equipment, and a fleet of CNG-powered 12m3 vans for smaller equipment, along with 23 delivery vans and 22 service cars for the company’s technical and commercial teams.

Audrey Miclard, Director CSR-Quality at Kiloutou, said, “Replacement of diesel vehicles with solutions that integrate gas, electric or hybrid power is part of a progressive renewal of the group’s transport fleet, which is the biggest direct contributor to emissions. Our ambition is to replace, within five years, 100% of our logistics fleet with clean vehicles.”

The Stralis carrier truck was tailor-made by Iveco, in collaboration with trailer manufacturer CVIM, over a period of two years, based on Kiloutou’s specifications. It needed to have a high capacity (32 tonnes) and a long range (almost 700km) using an alternative fuel source.

It is said to offer energy savings of up to 15% and a 9% saving on the total cost of ownership, compared to a diesel equivalent.

Fuelled by biomethane, the tuck emits 99% fewer fine particulates and 60% less NOx than is specified by the Euro Stave VI emissions standards, according to Kiloutou, while CO2 emissions are cut by 95%.

It has the added benefit of reducing noise pollution to less than 71dB.

Arnaud Manes, National Transport Director at Kiloutou, said, “By offering this innovative solution as a CNG carrier with great autonomy, we hope to contribute to a collective awareness by, on the one hand, encouraging the development of alternative distribution networks and, on the other hand, promoting new design initiatives among manufacturers to integrate this transport innovation into their standard offering.” 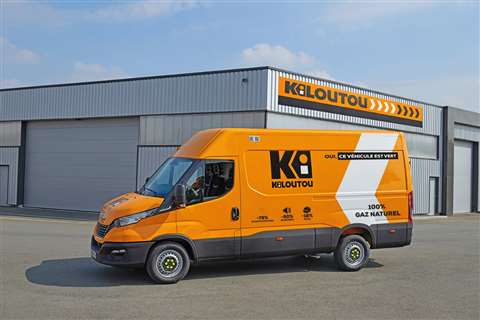 At the same time, Kiloutou has integrating a number of 12m3 vans powered by CNG into its fleet of light vehicles for the delivery of small equipment.

For this, Kiloutou chose the Daily Blue Pure model from Iveco’s CNG range.

It emits 95% fewer fine particulates and 80% less NOx than is specified by the Euro Stave VI emissions standards, according to Kiloutou, and by using biomethane it produces 95% less CO2 than a diesel equivalent.

Further to this, noise pollution is cut by 50%.

Meanwhile, Kiloutou has also introduced 23 delivery vans and 22 service cars that run on electric or hybrid power, for use by its technical and commercial teams.

They are currently operating in Ille-de-France and the East region.