Assuming the coronavirus crisis is eventually brought under control, work in the wind industry is holding up well.

In the UK, for example, government has reversed its four-year ban on the development of onshore wind farms by announcing they would be allowed to compete for subsidies alongside other renewable schemes. The move was welcomed by one heavy transport company as “the best news we have heard in some time.”

Wind energy projects can involve many special transport methods and types of equipment. Installing and maintaining the facilities all requires component transport.

Trends in the sector include turbines with higher hub heights, heavier drivetrains, longer blades, and increasingly remote and inaccessible locations. Turbines have accumulated sufficiently and been around long enough for the repower side of the business to be competing with new construction for transport and lifting equipment.

Equipment used in the wind transport sector includes telescopic semi-low loaders, extendible flatbed semi-trailers and self propelled modular transporter. Some components and many journeys demand the special properties of equipment designed especially for wind work. This includes special blade lifting trailers and tower section adaptors where the load itself forms the structural member making the connection between the front of the trailer and the rear axles.

Turbines are still getting bigger and so are their rotor blades, now very often more than 70 metres long. Goldhofer’s Ventum has five extension stages and can carry loads of well over 70 metres, the company said.

The Faymonville WingMax flatbed semi-trailer is also designed to move the longest blades. Its hydraulically lifting and lowering gooseneck (by 1,700 mm) and pendular axles allows negotiation over obstacles such as roundabouts. Also hydraulic is the steering on the pendular axles and the suspension too, to give the sharpest possible steering angle and maximum stroke for long suspension travel.

Canadian trailer manufacturer Temisko has announced a new blade trailer series redesigned for 2020. At maximum extension it is 218 feet (66.4 metres) long and “the industry’s best 46 degrees on an air rise suspension. We have also managed all of this with an exceptional tare weight of 36,230 pounds,” says Patrick Chartrand at Temisko.

Taking a different design approach is Goldhofer’s Blade-S system which uses the blade as part of the structure, linking the front of the trailer and the rear axles, in the same way the RA series tower adaptor trailers for tower sections do.

In a similar way, also for especially long blades, of 80 metres and more, Scheuerle offers its RBTS rotor blade transport system, developed with wind turbine maker Vestas. It is a two-axle jeep dolly with a free-turning device as well as a four-axle trailer. A quick coupler allows the wing root to be picked up from the ground. For the empty return journey RBTS can be reduced to a compact semitrailer combination. 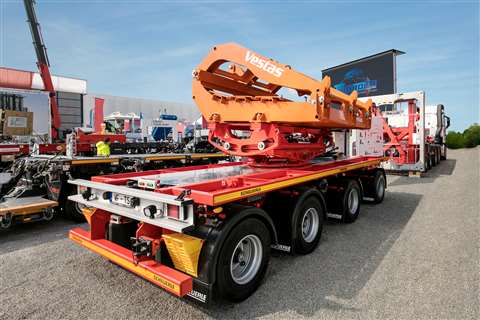 Mammoet has transported what are some of the world’s longest blades. The Dutch international heavy transport and lifting specialist was contracted by turbine manufacturer Siemens Gamesa to transport three 94 metre blades from its factory in Aalborg, Denmark, to a quay 1 km away.

The enormous blades are for a prototype turbine to be tested by Siemens Gamesa. It will produce enough electricity to power 10,000 homes. 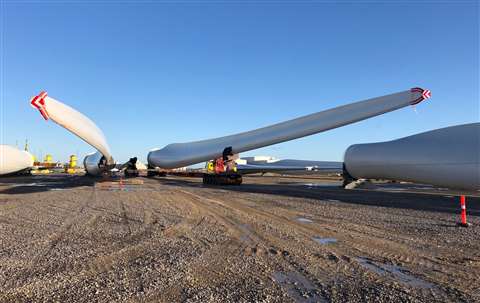 Mammoet moved a set of 94 metre-long blades in Denmark for an experimental turbine big enough to power 10,000 homes

An alternative to self propelled modular transporter (SPMT) was chosen. Mammoet used a custom trailer composed of 2 x 6 Nicolas MDEL axle lines hauled by a four-axle truck. Total length of the combination with its blade was more than 100 metres. Pre-building the trailer and transporting it in one piece to site saved 50 per cent of the time required by other industry solutions, Mammoet said.

In terms of blade lifters, Faymonville says its BladeMax is the strongest of its type on the market. It tilts and pivots a turbine blade from one end, allowing it to be raised to clear trees or buildings in tight corners. Goldhofer’s FTV550 is a proven blade lifting trailer system that can accommodate even the largest rotor blades, the company says. Scheuerle’s is the new rotor blade adapter.

Conventional low bed trailers can usually manage the movement of hubs, nacelles and turbine tower sections. Height can be an issue, however so a low deck height is important. Faymonville says it offers suitable units with a deck height as low as 200 mm.

Transformers are the heaviest components associated with wind farm transport. To deal with their weight, often between 200 and 300 tonnes each, UK transport specialist Allelys has a Faktor 5.5 girder bridge from Goldhofer. Configured as vessel bridge it helped move some for a substation to serve the 950 MW Moray East wind farm under construction off the coast of Scotland. Three transformers were destined for the New Deer inland substation.

Allelys Group was commissioned by project freight forwarder Deugro and delivered the first which weighed more than 260 tonnes and was almost twelve metres long. The 56 kilometre route was from the port of Peterhead to New Deer, with hills, bends and bridges presenting challenges. 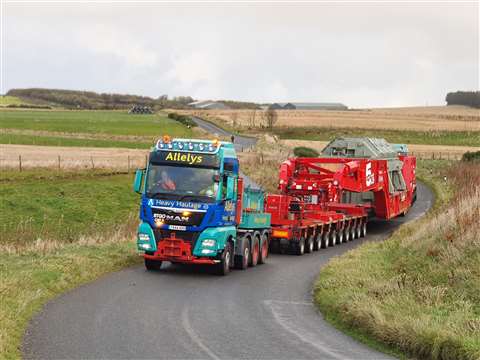 The Faktor 5.5 can load and move cargoes up to six metres wide and 17 metres long weighing up to 350 tonnes. At New Deer it was a 70 metre-long convoy with a police escort. Company owner David Allely commented, “It proved a big advantage to be able to use the Goldhofer vessel bridge in a short configuration of ten axles at the front and ten at the rear. That makes us much more manoeuvrable and above all more economical.”

Etnyre International has been building light weight Hydraulic power tower trailers to haul the different nacelle units for the wind power industry. The RTNP75TD3-R4/5A-RAWC trailer has a west coast walking beam suspension and three axle jeep. It has a 32 foot (10 metre) well with a 150,000 pound in 10 foot (68 tonnes in 3 metres) rating and the overall length with tractor included is under 125 feet (38 metres). Empty with a tractor it is around 74,000 pounds (33.6 tonnes) and the empty weight of the trailer, jeep and booster is under 50,000 pounds (22.7 tonnes). 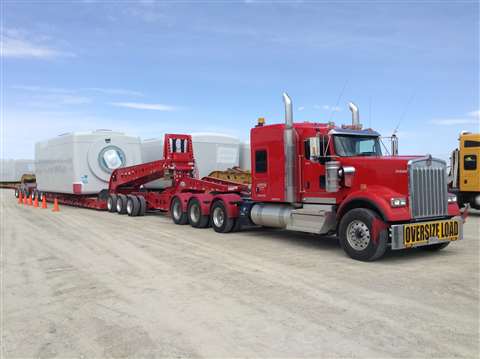 For tower sections Temisko is offering a 3+3 half Schnabel as a direct replacement – with increasing popularity – for a double Schnabel. It can carry a 155 000 pound (70 tonne) tower section while being as short as possible, Chartrand says. Some customers have changed over to the 3+3 which has an hydraulic self steering mechanism.

Where is the wind

As in many other countries the government in Turkey has supported the development of renewable energy sources and wind energy in particular. Last year Turkish specialist Hareket was installing turbines with hub heights of 120 metres and rotor diameters of 150 metres. The company transported and erected five of the the country’s most powerful (4.5 MW) turbines with the longest blades, at 74.5 metres. They were for the Akça wind farm at Izmir.

Hakan Törün, Hareket spokesperson, said, “We are facing logistical challenges like remote locations to access the job sites. We cannot use the former routes we used to use due to longer towers and blades. New roads and bridges are being constructed.”

Another company investing in its wind equipment fleet, from Goldhofer and Volvo, is Finland’s Havator. “With this excellent equipment, any size of wind turbine tower sections and rotor blades can be transported for all wind turbine manufactures,” says Ari Henriksson, vice president of the special transport segment at Havator Finland. “We are ready for the season and to offer high performance transports with this carefully selected equipment.” 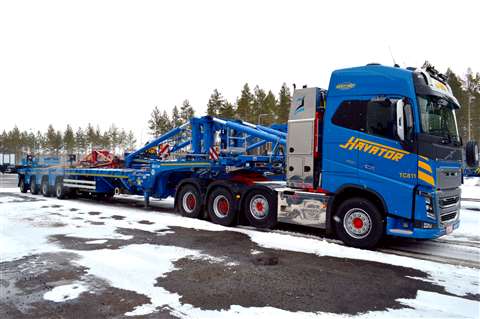 Roll-Lift USA, from Dayton, Texas, used its four 3-axle TeleMax trailers from Faymonville to move a new delivery of wind turbine blades. First, Roll Lift unloaded the blades at the port of Houston. Tandem lifts were made using a Manitowoc crane on a pedestal and one of the vessel’s cranes.

The trailers have four extensions for a total open length of 200 feet (61 metres), composed of 176 foot (53.6 metre) deck length and a 24 foot (7.3 metre) non-load bearing pull-out to allow for a longer overhang. To achieve a steering angle of 55 degrees, the TeleMax trailers use a double race turntable steering design.

Commenting on the trailers Denis Brouwer, president at Roll-Lift USA, said, “I witnessed the operator extending it and it runs like clockwork. The hydraulic legs as well as the simple locking mechanism makes it so much easier to operate.” 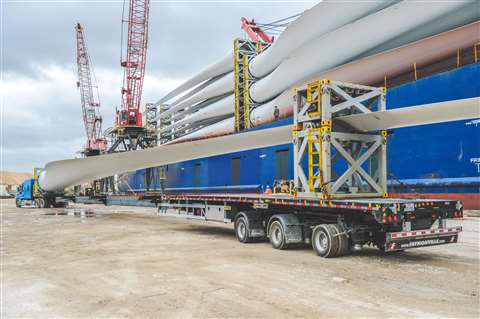 Transport and lifting association ESTA in Europe is calling on its members and supporters to encourage the wind industry to adopt its new best practice guide and improve the sector’s safety record.

The much-anticipated Best Practice Guide for the Transport and Installation of Onshore Wind Turbines was published at the end of March. The 52-page document is the result of more than three years’ work and aims to help reduce the number accidents. Ton Klijn, ESTA director, said, “We believe the guide is an excellent and valuable document and deserves the widest possible circulation. It has already attracted a lot of interest but we now need the industry to act on its recommendations.”

To download a free copy of the Best Practice Guide for Transport and Installation of Onshore WTG Systems, see: http://estaeurope.eu/BPGwind 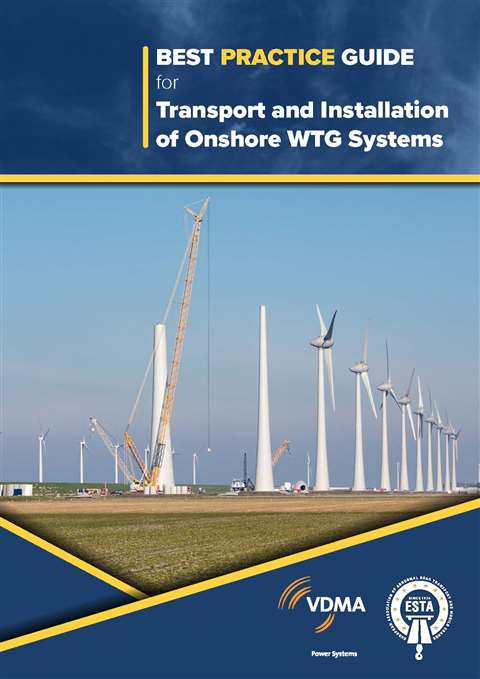