A fleet of Doosan excavators working with large breakers has been used by Spanish eartmoving specialist Excavaciones Gaby to clear space for a new site for building work in the centre of Santander.

“The work carried out required excavation, emptying and removal of materials for the future construction of subsidised housing, promoted by the Santander City Council,“ said said Gabriel González, president of Excavaciones Gaby. 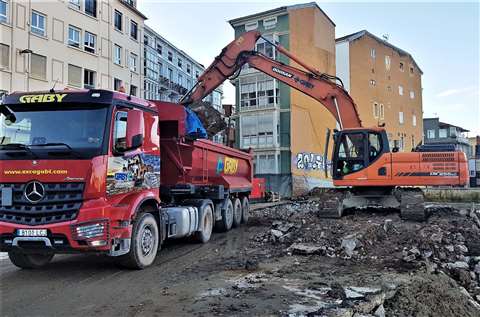 “This entailed removing materials to a fair depth for the creation of underground garage space and much of the work involved the removal of quite hard rock.”

Two Doosan DX340LC-5 excavators with breakers and a Doosan DX255-3 were used for the clearance work after the drilling and helped to remove about 50,000 cu m (1.77 million cu ft) of material from the site.