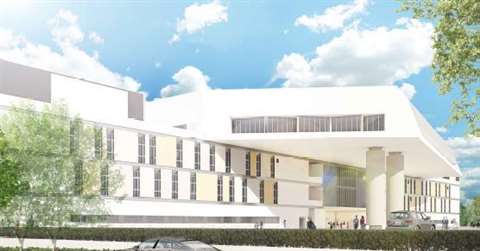 An impression of the under-construction hospital in Taranto, Italy

At a groundbreaking ceremony for a new 715-bed hospital in Taranto in southern Italy, the country’s Prime Minister, Giuseppe Conte, said the contractors on the project “must hurry”.

He said, “It’s like the Genoa bridge. We are here to support you. We have to make it in time. It doesn’t exist that in Italy it takes two years, three years, four years, five years for a work.”

In his speech, Conte was referring to the San Giorgio bridge that replaced the Morandi bridge in Genoa, which collapsed in August 2018.

The irreparably damaged bridge was dismantled, removed and replaced by the newly-designed structure in less than two years, with teams from a wide range of Italian contractors working together round the clock to achieve the record result.

The start of construction on the €162 million San Cataldo hospital project comes as Italy reports record numbers of positive tests for Covid-19, signalling a gathering of pace in the second wave of the pandemic.

The hospital structure will have an area of 226,297m2; It will consist of six main blocks and will host 70 clinics, 28 diagnostic rooms and 19 operating theatres.

The building will be erected on one foundation slab, measuring 310m x 240m, on which a central three-storey building will stand as a central axis, with four C-shaped blocks, each with four storeys, radiating from the central block.

The governor of Puglia, who joined the Prime Minister at the groundbreaking ceremony, responded to his call for rapid construction by saying, “We are in Puglia. We can do it.”