Sinoboom has launched a new global colour scheme and branding at Bauma China, taking place in Shanghai this week, along with a range of products including a hybrid articulating boom lift.

The new blue and graphite livery will be adopted across the company’s entire equipment range, complementing the company’s change of name to Sinoboom Intelligent Equipment, at the beginning of this year.

The China-based company said blue represented trust and security in its country, which it said underpins the message it wants to send out to the global industry, concerning its products and services. “The updated look and name demonstrate Sinoboom’s dedication to the supply of innovative, user-friendly and reliable access equipment,” said Sinoboom’s founders, chairman Steven Liu and general manager Susan Xu.

The new colour has historical significance too; blue is the original colour of Sinoboom’s machines when the company was founded in 2008, before it was changed to the most recent orange/red scheme. It also falls closely inline with the darker blue colour, adopted by Sinoboom for its European products. “Following favorable customer feedback of the blue Sinoboom scissor lifts introduced to the European market in 2018, and the popular vote from Sinoboom team members, this bold move was decided,” said Sinoboom. 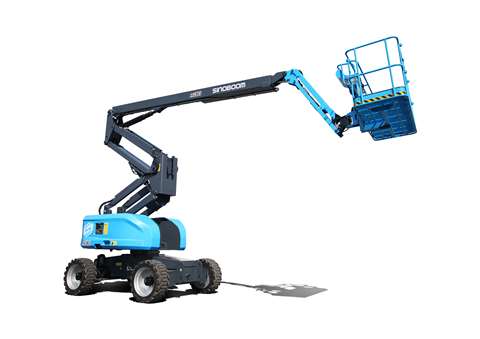 Sinoboom has also launched a hybrid articulating boom lift at Bauma China. The AB18HJ provides lower emissions and 30% less fuel consumption, compared to a purely diesel version, and offers up to one week’s operation from a single charge and full fuel tank. It can also work on battery power alone, allowing for indoor work. In addition, the AB18HJ features an active oscillating axle for improved gradeability and travel on uneven ground, as well as improved reliability and safety.

A total of 20 units from Sinoboom’s MEWP range are on show at the show, with other new products including two models from the telescopic boom lift Plus series: the TB20J Plus and TB28J Plus. They feature large load capacities up to 454kg and 45% gradeability, as well as a patented anti-skid control system. 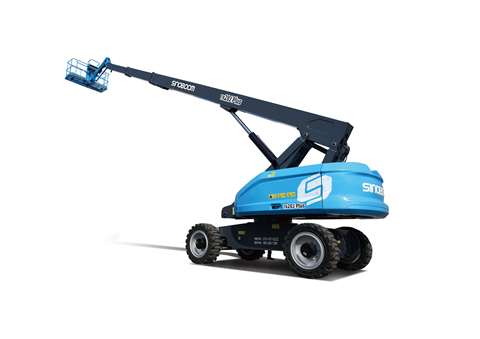 The TB28J Plus telescopic boom

A new 1218RE electric RT scissor offers 30%-40% gradeability, easily handling the demands of outdoor operation and constant active oscillation. The 1.6m-wide platform is equipped with one-way extension platform and the unit offers one-click levelling. There is a double-sided hatchback-style door for convenient maintenance and repair and swing-out engine compartment.