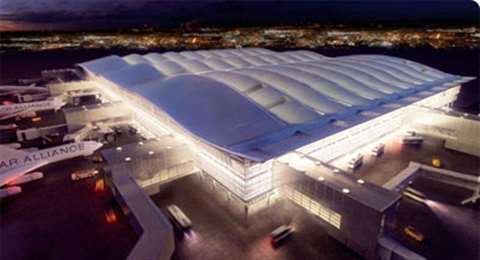 UK airport operator BAA has unveiled designes for the new UK£ 1 billion (€ 1,16 billion) Terminal 2 at London's Heathrow Airport. The scheme is part of a UK£ 4,8 billion (€ 5,58 billion) investment programme across the airport, which includees UK£ 2,2 billion (€ 2,56 billion) for the eastern area containing Terminals 1, 2 and 3.

Construction is due to run in to phases to minimise disruption. The first stage, due for completition in 2013, will be the construction of the new 180000 m2 terminal building. Demolition of the existing Terminal 2 and the Queen's building, which curretnly occupy the site, is scheduled for later this year.

The second phase of construction will see the new Terminal 2 extended into the ecisting Terminal 1 site, with the construciton of a second satellite building. This will see the capacity of Terminal 2 increased to 30 million passengers per year.

The second phase is due for completion in 2019. Following that, Terminal 1 will close for redevelopment.

The new Terminal 2 will be for the exclusive use of the Star Alliance airlines, which includes BMI, Lufthansa and SAS in Europe and some 20 other partners.

According to BAA, the new building will produce -40% less carbon than the buildings it replaces. It will include large north-facign windows that will reduce the need for artificial light, without generating uncomfortable levels of heat. The building will also have an energy centre partlly fuelled by renewable sources, including solar panels on the roof.

Steven Morgan, BAA Capital Director: "This is an exciting project, for the engineers and builders, and for our airlines and passengers. The challenges are not to be underestimated. We are constructing a significant new building in the middle of one of the world's busiest airports and ensuring the operating airport is not affected is an absolute priority."

Initial designs for the new terminal were devised by Foster + Partners and then developed by HETCo, a joint venture between BAA's owner, Ferrovial and Laing O'Rourke.
Projects Airports Construction
Related Articles