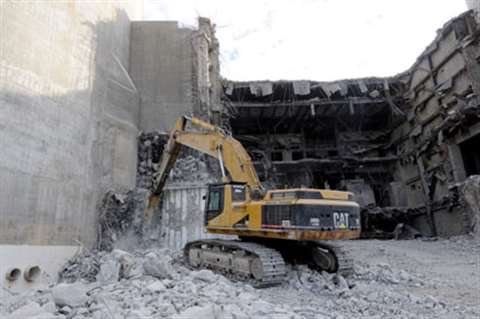 The only nuclear facility in the US state of Indiana, Marble Hill, is being cleared to make way for redevelopment. Construction of the plant began in 1977, but after US$2 billion (E1.5 billion) had been spent, work was halted in 1984, leaving administrative buildings, outbuildings and thick reinforced concrete silos and other containment structures lying unused. MCM Management Corp is clearing the land but the containment structures have proved a major demolition challenge that is being faced by Atlas Copco HB7000 heavy breakers.

The breakers are being used to expose the steel reinforcement on the two silos and to remove the structure between them so that they can be imploded by subcontractor Chicago Explosives. This will allow the silos to be laid on their sides. In addition to the large amount of steel rebar of varying dimensions in the structure of the silos, they also contain thick steel beams and below ground, there is a round steel nuclear containment vessel. In addition, other stainless steel tanks are sunk almost four storeys into the ground.

MCM aims to recycle 99% of the structure by weight - since the facility was never activated, there is no nuclear contamination to be dealt with.