Magdeburg, Germany-based lifting and transport service provider Beithaupt & Philipp has expanded its fleet with the purchase of a Demag AC 45 City crane.

It joins three other Demag brand cranes already in the company’s fleet: an AC 30 and two AC 40s. “We’ve always been tremendously happy with the performance of our three Demag cranes, so deciding on the new AC 45 City wasn’t particularly hard,” said Breithaupt & Philipp general manager Uwe Podlech. “We’ll be using the AC 45 City primarily to install and remove prefab concrete elements, such as stairs, as well as to install elevators in buildings. When it’s not possible to remove the roof in these cases, the ability to telescope under load is absolutely indispensable, and that’s another reason why the only choice as far as we were concerned was the AC 45 City.”

Podlech picked up the crane from the Demag factory in in Zweibrücken with general manager Jens Napierala and crane operator Karsten Eberhardt. The crane was handed over by Tadano Demag sales manager Ulrich Wagner. 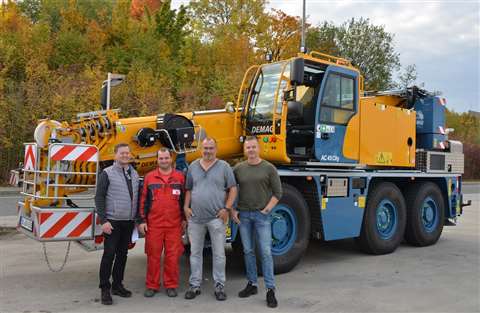