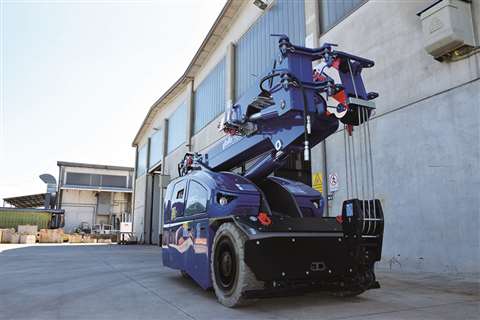 Around the world modern society is dependent on a range of service and manufacturing industries, writes Christian Shelton. No matter how diverse these industries are, they all share one thing in common: at some point they require the use of lifting services. The cranes used for these jobs vary almost as much as the industries themselves; this is evidenced by the latest collection of new cranes for industrial applications.

One of the most common types of equipment used for industrial lifting applications are hydraulic gantries. Italian manufacturer Custom Lifting Products (CLP) has expanded its hydraulic gantry range. The manufacturer is focusing on small to medium lifting categories, from 60 to 200 tonnes, with its LG gantry series rather than its traditional heavy lifting remit. The company said that with its LG gantries it is looking to minimise transport size and weight while still providing a significant capacity at an impressive height. There are five gantries in the series, all of which are less than one metre wide and they can lift up to heights of between 5.05 metres to 7.5 metres. 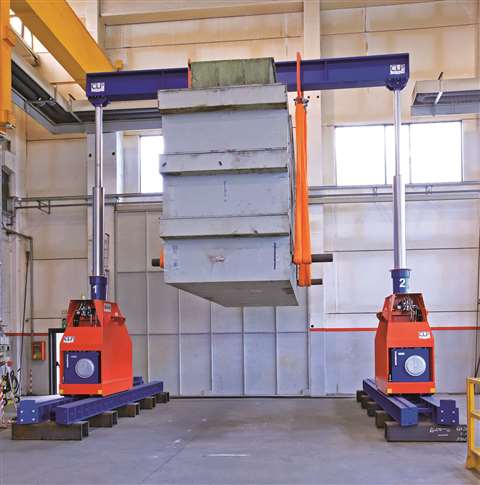 The new LG series uses the same lift control system as CLP’s larger capacity gantries. This control system includes lift synchronisation between the four towers and a radio remote control that displays the lift height reading on a colour LCD screen. The LG gantries are also equipped with a safety limiting valve designed to avoid overloading the towers even when side shifting the load. Each LG gantry has a self-contained power pack in each tower. The towers have been designed for ease of maintenance with the oil reservoir being made separately and then assembled in the tower frame. This, CLP explains, means that, if required, it is easy to remove from the frame for repair. The lifting cylinders have incorporated feed and return lines rather than flexible hoses which hang around the gantry tower. 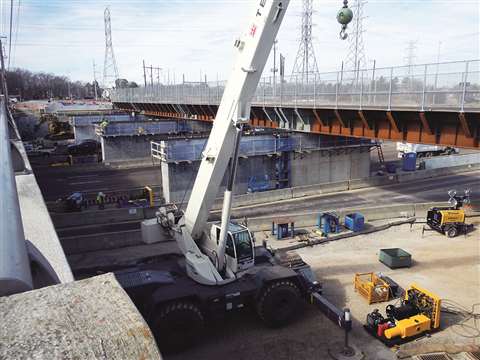 The SmartJack jack synchronising system from Buckingham Structural Moving Equipment being used to push an overpass into position in Tennessee, USA

Pennsylvania, USA-based company Buckingham Structural Moving Equipment manufactures hydraulic jacking systems, hydraulic jacks, and heavy lifting accessories. Its most recent advancement is the design, programming, and production of the SmartJack synchronising system which allows multiple jack machines to be interconnected to work as one large unit. This system brings both financial and efficiency savings, Buckingham Equipment claims, as it negates the need for a large, rarely-used jack machine with dozens of ports and instead allows smaller jack machines from different crews to be synced together on a single project, as needed.

Buckingham Equipment has already rented its SmartJack system out for a project in Tennessee where five spans of a new railroad overpass were constructed beside their new location and then pushed into place all at once using four jack machines to synchronise the hydraulic push rams. This, it says, kept the downtime for the track usage to a minimum.

Testing on the Enerpac SCJ50 Cube Jack was completed towards the end of 2019, where four of the compact, portable hydraulic jacks were connected together via a Split-Flow Pump to lift a 226.5 tonne test load up to two metres.

The SCJ50 Cube Jack is designed to provide an alternative to traditional climbing jack systems, says Enerpac, offering contractors a safer alternative to jacking and packing with wooden cribbing. Enerpac explains the SCJ50 Cube Jack works in a similar way to its other jack-up systems but is simplified as electrical controls are not required. Blocks are stacked manually, with a mechanical lock on the up stroke and down stroke. The operation is incremental; at the end of the up stroke the lock engages. Once engaged, the lift cylinder is retracted and another block can be added.

“We also subjected the cube jacks to a 1.5 percent side load at its maximum two metre height to successfully demonstrate the stability of the cube jack even with an oversize load,” added Crisci.

Enerpac’s ETT200 and ETT400 Turntables are also finding favour in industrial applications. They are designed to facilitate safe repositioning of heavy or oversize loads, simplify handling and provide adjustment and precise orientation of loads up to 200 and 400 tonnes respectively.

Ormig is an Italian manufacturer of cranes that have become popular for use in industrial environments. The company was founded in 1949 and has continuously been developing its portfolio ever since. In recent years its range of electric cranes, with capacities between 30 to 60 tonnes, have become popular for indoor industrial load moving applications due to their pick and carry capabilities, compact dimensions and light weight. Being so light also means they can be transported throughout Europe via truck without requiring transport permits.

The company’s indoor electric cranes rotate on a patented system akin to pivoting turrets on SPMT. The company started using this system on its larger cranes and is gradually migrating it to its smaller crane models. The system means that the cranes have a very reduced steering radius, so much so they can turn-in on themselves.

Stability, especially when travelling with a load on the hook, is provided by four points of wheel contact with the ground. A kinematic mechanism prevents the wheels from sliding, in turn improving steering accuracy, claimed Ormig. Although available globally, Ormig said the most number of sales to date have come from within Europe.

An 80V, 560Ah lead-acid battery with automatic water refill provides the power for the 4.2kW electric motor driving the front wheels with their large-diameter 250-15 ins tyres. White non-marking tyres are also available. Maximum gradeability is an impressive 14-degrees and travel speed is stepless from 0 to 6 km/hr. The twin 23x9-10 ins rear tyres offer a 180-degree steering angle for a rear tail swing of only 2.8 metres.

The crane has a three-section full-power boom with a maximum angle of 70 degrees and a maximum height of 9.4 metres, at which it can lift 2.5 tonnes.

Maximum forward outreach from the centre of the front tyres is 5.5 metres with capacities of up to 1.8-tonnes. The boom also offers negative angles of up to -10-degrees. For increased reach, a three tonne capacity two metre long hydraulically-offsetable jib is offered. Maximum lifting capacities are achieved by deploying the hydraulic crossbar stabiliser which is supplied as standard equipment.

Spanish specialized and industrial crane manufacturer Jaso Industrial Cranes has manufactured two large cranes for use in the iron and steel industries. The first crane is already being used by steel maker Tata Steel at its Port Talbot plant in the UK. It is a 41 metre slab crane that handles freshly cast steel slabs with temperatures of up to 800 degrees. It is an outdoor open-winch double-girder crane that can lift 135 tonnes. The crane’s winch is equipped with alternative rotation and an independent control cabin.

The second is an EAF charging and ladle handling crane which is currently being assembled and is due for completion early this year. It has a main lifting capacity of 500 tonnes and an auxiliary lifting capacity of 105 tonnes and comprises four 23 metre girders and an open-winch hoisting mechanism with two engines connected to a central planetary gearbox. This way, Jaso Industrial Cranes explains, if a component stops the crane will be able to move the load at half the speed but with the same FEM M8 classification. It has a CCTV system, an uninterruptible power supply, a vibration gauge, Ewon WiFi to manage and monitor it, heat shields around the control area, as well as two interconnected air conditioning systems.

The fully-automated overhead crane from Condra Cranes and Hoists at Lonmin’s platinum mine in Marikana, near Pretoria, South Africa

South African crane manufacturer Condra Cranes and Hoists has developed a fully-automated overhead crane, the first model of which it has delivered to mining group Lonmin. According to Condra, the full automation crane provides an alternative to traditional pendant and remote control and is in line with a general trend away from manual control in industry and mining.

Lonmin is using the crane at its platinum mine in Marikana, near Pretoria, South Africa. The crane is a 16 tonne capacity, 16 metre span electric overhead travelling grabbing crane, featuring a customer-specified mechanical rope grab in place of the hydraulic alternative.

There are dual hoists in the design; one to raise and lower the load, the other to mechanically close the grab by means of an internal sheave arrangement to overcome the spring-loaded open state.

Variable speed drives are fitted throughout the crane, delivering maximum speeds of 10 metres per minute on the lift, and 20 and 40 metres per minute on the cross-travel and long-travel respectively. Four long-travel motors deliver the materials handling equivalent of four-wheel-drive, enabling automated control of all four wheels for precise crane positioning accurate to within 5 millimetres.

The crane is fully automated with a manual override. It is programmed by an operator from a remotely located control room, where on-screen monitoring is complemented by a visual monitoring capability via closed-circuit television.

Condra managing director, Marc Kleiner, said that the company was making full use of new developments in sensors, controls and software to offer a very precise positioning capability in automated applications. “This is a capability that we will offer to our customers as an option,” Kleiner says. “We will mainly but not solely target the copper mines, especially tankhouse and copper-leaching applications where we have extensive experience.” 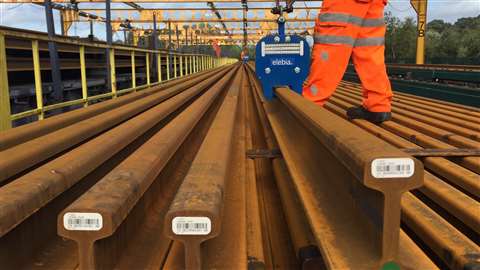 Another industry benefiting from lifting automation is the rail industry. Rail network owner Network Rail was looking to increase productivity and enhance safety in the lifting and handling of rail tracks at its Eastleigh depot. Operators were having to walk onto rails to get into position, with the risk of slipping and catching their feet between the rails. They also had to climb onto the trains and rail stacks and crouch over in order to engage and release the previous clamps/grabs manually.

The automated solution came from Spanish smart lifting solutions company Elebia. After gathering key information regarding the current lifting solution and the lifting requirements, Elebia consulted Network Rail before delivering a concept model for real-time trial. The response from Network Rail was positive and, following a few tweaks and tests, 26 rail lifting clamps were produced. Elebia says these were then officially implemented by Network Rail as its preferred solution for the safe lifting and handling of rail tracks. A video of the rail lifting clamps in action, and more information about them, can be seen here: www.youtube.com/watch?v=8aOFVO6_CaY&feature=emb_title

Another supplier to the rail industry is Sheffield, UK-based swing jib crane manufacturer, Mechan. The company worked with main contractor BAM Nuttall to design, built and install an eight-tonne capacity jib crane, the Powermaster 270, for a renovated rail depot in Liverpool, UK. New trains from Swiss train manufacturer Stadler will be kept and maintained at the depot

The underbraced crane stands six-and-a-half metres tall and spans six metres. It has a capacity of eight tonnes, a powered 180-degree slew and, because it is located outside, it has also been supplied with stainless steel pins and rollers to prevent corrosion.

The variety of cranes presented here provide just a glimpse of the demand there is for lifting solutions from industries large and small around the world. As long as modern life relies on having its needs met via industry, then industry can rely on equipment manufacturers to meet their lifting requirements.