Spanish manufacturer Ausa has launched five new products to complete its rough-terrain range: a reversible dumper, an articulating dumper, an all-terrain forklift truck, and two new telehandlers. They are all available globally.

The DR601AHG reversible dumper, with a payload of 6,000kg, has an operator station – including seat, steering wheel, joystick and pedals – that can rotate 180˚, so that the driver can always face the direction of travel. 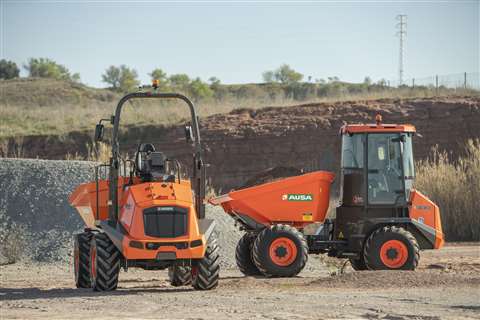 Ausa’s new DR601AHG reversible dumper, shown with and without a cab

Operator safety and comfort is further improved by the fact that they can mount and dismount the dumper from both sides of the machine.

To make the DR601AHG more efficient, it has an ECO Mode function, whereby the engine speed is automatically controlled to minimise fuel consumption and CO2 emissions.

For safer operation, the model is also fitted with Ausa’s Hill Holder system, start-assist and safety system that engages the dumper’s brake when you take your foot off the accelerator when not travelling.

There is also the option to add Smart Stop, which is a plug-in system that automatically shuts down the engine when it is not in use.

The reversible dumper has hydrostatic transmission and is equipped with a Stage V compliant 55.4kW Deutz engine. 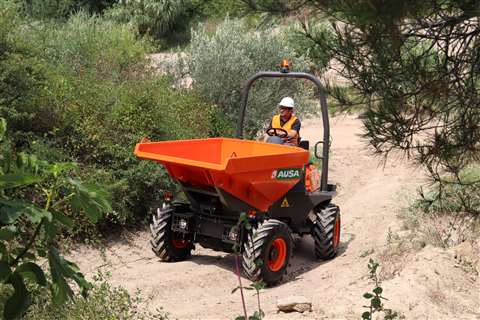 The new D300AHG articulating dumper has a 3,000kg capacity

Meanwhile, the new D300AHG articulating dumper has a payload capacity of 3,000kg and a side-tipping skip that is designed to optimise visibility to the front of the machine.

Based on Ausa’s 4.5 tonne dumper, it uses the same chassis, hydrostatic transmission and engine cooling system.

The D300AHG has hydrostatic transmission and is powered by a Stage V compliant 18.5kW four-cylinder Kubota engine.

As an optional extra, the new model can be fitted with Ausa’s Fully Visibility System, which includes cameras and proximity sensors.

As with the other models, this new all-terrain forklift has a digital screen on the dashboard, which provides the operator with machine information. It can be navigated using the same joystick that operates the mast.

The C501H comes with a self-diagnosis system and is telematics-ready.

It also has an ECO Mode system and Smart Stop, to reduce fuel consumption and CO2 emissions.

In terms of safety, the operator’s visibility has been increased by 30%, and the model includes Ausa’s Hill Holder system. 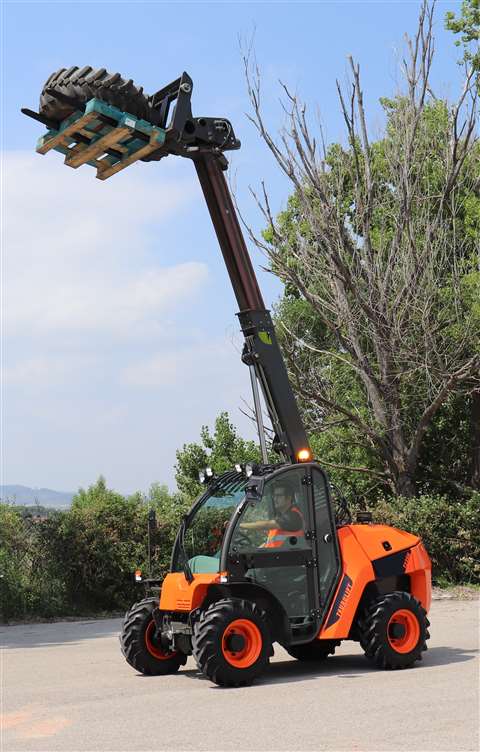 The T235H is one of two redesigned telehandlers from Ausa

Finally, the two new telescopic handlers – the T204H and T235H – have the same name as their predecessors but they have been redesigned to enhance the user experience.

Both models have the same platform and features. These include a 32.5kW Kubota engine and a digital display in the cab through which the operator can control any part of the dumper and access the diagnostics menu and all maintenance parameters.

The updated models are suitable for rough terrain and confined spaces, with 4x4x4 drive and three steering modes: front-wheel, all-wheel and crab mode.

The design of the cab and the placement of the boom on these machines gives the operator a 360° view, making for safer operation.