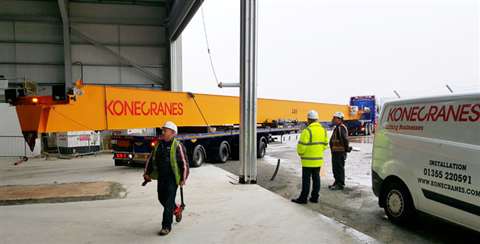 One of the crane’s girders ready for installation within the new hangar having been transported from Konecranes’ manufacturing site in East Kilbride. Transportation and installation took just one day

The double girder crane spans 36 metres and has a two tonne capacity hoist. It has a CXT electric wire rope hoist and will be used to lift and move components, such as engines and gearboxes, at the new 21,000 square foot hangar.

The new hangar was constructed by main contractor MTM Construction of Aberdeen. It will be used to service and maintain several units in the Bond Offshore Helicopter fleet.

Konecranes was responsible for transporting the crane from its manufacturing site in East Kilbride to Aberdeen Airport and then installing it on site. Ian Rodger of Ian Rodger architects, said, “The whole process was something to witness, particularly as everything unfolded during one Saturday. Not only did Konecranes overcome the tight confines of access roads, the airport hangar and M&E services, they manoeuvred the crane into position before successfully installing it onto its support beams the same day.

“The timeframe in which all of this happened was really quite remarkable, and one that saw Konecranes being ably assisted by Finnie Transport, James Jack Cranes, MTM and the local constabulary. Collectively, it was an outstanding operation, best summed up by saying a big thank you and well done guys,” Rodger added.

Gordon Adie, Konecranes industrial equipment director for Europe West, said, “This is a perfect example of not just the design and engineering planning that goes into a project, but the many and varied logistical constraints that we often have to face. In this instance the physical span of the crane not only meant we had to look at minute transportation detailing and exact route planning, the same was equally applicable onsite, in particular in being able to manoeuvre the crane beams successfully into the hangar.”

Bond Offshore Helicopters specialises in providing energy support and life and rescue services to blue-chip corporations in the UK's offshore oil and gas industry. It is also responsible for transporting more than 200,000 oil and gas industry staff across the North Sea.