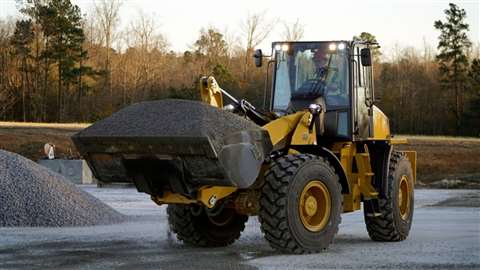 Caterpillar has added three new models to the M Series compact wheeled loader range: 910, 914, and 920, the latter replacing the 918M.

Among the design changes is a new engine for all three models; the Cat C3.6 replaces the C4.4, and with the new engine, all models get a horsepower boost.

Also new for the 910 and 914 is an available rotary-sensor-kickout system with both fork and bucket settings. The new dual-setting feature is now included in the 920’s standard kickout system. Controlled by four buttons in the cab, the new system can be adjusted to accommodate the kickouts required by two different work tools. Once the position of the attachment is moved to the desired location, a two-second press of the appropriate button programs that function, which is recalled by using detents in the joystick.

All functions can be used together after setting the tool to the desired recall locations. Correct use of the kickouts has been shown to save up to 20% of the cutting edge life of a bucket.

Additional rear guarding is now available for the 914 and 920, and new auxiliary hydraulic lines are available when the three- or four-valve option is selected. Other new options include a reversing fan, LED working and under-hood lights, Fusion coupler for the 914, and USB ports in the cab.