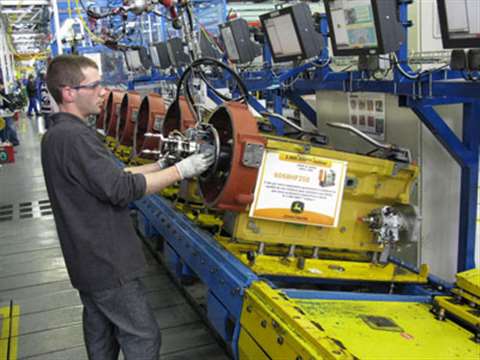 The 2000000th engine built at John Deere's Saran factory on the production line.

The Saran factory has been producing engines since 1965 and currently has a production capacity of 100000 engines per year. The factory originally built engines for John Deere's agricultural and industrial machinery, but since the mid-1990s it has been building engines for sale to other original equipment manufacturers (OEMs). Production for this market started at some 3000 units in 1994, but last year hit 55000 engines.

"The next few years will be crucial for maintaining this growth," said Pierre Guyot, general manager of the John Deere Saran factory. "We have made substantial investments at the Saran factory to support the development of our Tier 4/Stage III B engines. These include increasing manufacturing capacity, installing new test facilities, enhancing the production processes, and emphasising quality management."