Winners at the fourth Diesel Progress Summit Awards included Danfoss, Kohler, Loop Energy, Elevāt, Jacobs and Deutz. Danfoss came away with two awards for Powertrain Product of the Year and the ‘best of the best’ Achievement of the Year award. 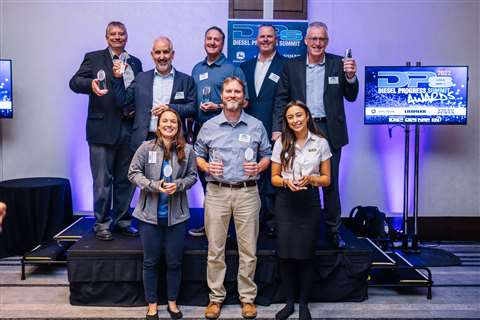 The awards, organized by Diesel Progress magazine and KHL Group, were held at the Loews Chicago O’Hare hotel in Rosemont, Ill.

The full list of winners and shortlisted companies was as follows:

Engine Technology of the Year

The judges said they were particularly impressed with the capabilities of this engine brake and its use of cylinder deactivation in its function.

The judges noted that the Elevāt technology was flexible and adaptable to a range of machine and vehicle markets.

Powertrain Product of the Year

This technology really impressed the judges, with one of them calling it “a game changer.”

One of the things that jumped out to the judges was its serviceability, which was a key design target for Kohler.

The judges said they were most impressed with the overall capabilities of this company, which distributes Deutz, Isuzu and Scania engines.

Engine Distributor of the Year – International

The judges said; “Active for more than 90 years in Italy and is considered among the gold standard of engine distributors in the EU.”

Electric/Hybrid Application of the Year

The judges noted; “it’s the future and it’s here now.”

Achievement of the Year

Mike Brezonick, Vice President of Editorial, Diesel Progress, said at the ceremony; “Thank you to all the of the companies and individuals who submitted nominations. What happens in these industries doesn’t get nearly enough recognition, we think, and you help us change that, at least in a modest way.

“All of the nominated products and companies have a lot to be proud of.”

Bob Apple, an independent consultant who spent more than 40 years in the automotive, off-highway industrial, marine and powertrain industries, which included senior positions in manufacturing, sales and marketing and industrial engine sales at Volvo Penta.

Clint Schroer, who spent nearly a decade at Cummins, in both positions at the company’s headquarters and at a distributor before he moved on to roles in digital software and services, autonomous trucking systems and digital strategy.