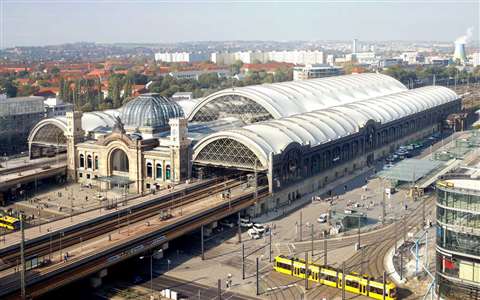 As well as the rail infrastructure, the proposal calls for the building of a 25km-long tunnel, running beneath the Ore Mountains and the total cost of the venture is estimated to be approximately €5.4 billion.

The line would run from Dresden in the German state of Saxony, to the Czech capital Prague, with an estimated journey time of 60 minutes – some 75 minutes faster than is currently possible.

Travellers to Prague from Berlin will also benefit, with a journey time by rail of 2 hours and 15 minutes; approximately half the time it currently takes to travel between the cities by road.

The first part of the project, set to run from Prague to Lovosice, is expected to be completed between 2030 and 2035, with the full line in service by 2050.

The officials who took part in the signing ceremony were DB’s head of infrastructure, Ronald Pofalla, Enak Ferlemann, Germany’s parliamentary state secretary at the Federal Ministry of Transport and Digital Infrastructure, Michael Kretschmer, prime minister of the Free State of Saxony, Michal Fridrich, head of the Department for International and European Affairs at the Ministry of Transport of the Czech Republic, and Jiří Svoboda, general director of Správa železnic.

Following the signing of the agreement, Enak Ferlemann said, “Rail continues to weld the metropolises and regions of Europe together. The Brandenburg Gate, Frauenkirche and Charles Bridge move very close together with this mega-project. From Berlin via Dresden to Prague in just 2 hours and 30 minutes, this will be an unbeatable offer for passenger and freight transport by rail. With DB and our Czech colleagues, we are laying the foundation for new, limitless and fast mobility in Europe.”

The project partners said a detailed feasibility study is currently underway, with seven route and three tunnel options being assessed and accurate costs provided by this summer.

The German-Czech project team is also reported to be preparing tenders for the line’s tunnel.