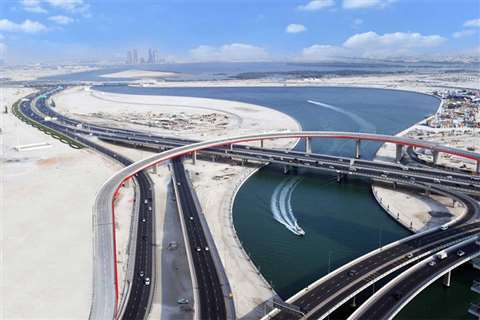 The new bridge in Dubai will open in January 2018

The bridge extending from Al Khail Road to the Financial Centre Road in Dubai, UAE, constructed in collaboration with Emaar Properties, will be opened early January 2018, according to the chief of the Roads and Transport Authority (RTA).

The contractor is currently putting the final touches on the project in preparation for opening, explained Mattar Al Tayer Al Tayer, RTA’s director-general and chairman.

“The project encompasses the construction of a two-lane one-way bridge extending 1.27km built on single columns crossing over the Dubai Water Canal. The project works include lighting and infrastructure works such as the shifting the impacted utility services like water, electricity, irrigation, sewage and telecommunication lines,” said Al Tayer Al Tayer.

The bridge, which starts from the intersection of Ras Al Khor Road-Al Khail Road, encompasses adding two lanes extending 0.5km to the existing road to enable direct flow of traffic from Dubai-Al Ain Road to Al Khail Road via the upper deck of the Financial Centre Road. Works include providing an entry point for the parking terminal of the extension of Dubai Mall.

The construction of the bridge is intended to accommodate the massive expansion of Dubai Mall undertaken by Emaar Properties rendering it the largest shopping and entertainment destination in the world capable of receiving more than 100 million visitors per annum.