Tomorrow’s customers was the theme at this year’s annual convention held by the European Rental Association in front of a 320-strong crowd. 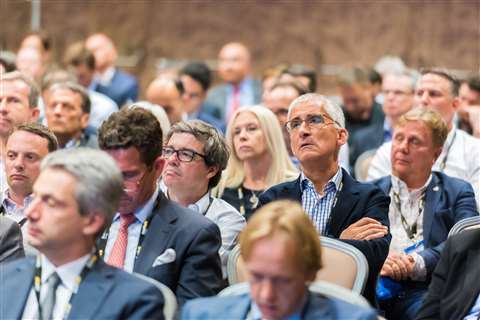 The event was held in Vienna, Austria, and saw speakers provide educational insights into the future of the industry, while the ERA’s committees had the chance to update delegates on progress they had made over the last 12 months. Delegates were also treated to a site visit, hosted by Zeppelin Rental, on the morning of the first day.

There was an update on the European rental market by the ERA’s secretary general Michel Petitjean. Petitjean reported that there was a 3.1% increase in the European rental market during 2017, and said that a rise of 2.5% was expected for 2018, at a constant exchange rate. The ERA monitors 15 countries – Austria, Belgium, Czech Republic, Denmark, Finland, France, Germany, Italy, the Netherlands, Norway, Poland, Spain, Sweden, Switzerland and the United Kingdom. Interestingly, the next three years are expected to see all of those countries grow on average, with Spain with only Spain rising around 4.5%. In its latest update, though, the ERA adjusted Spain’s annual average rise to 0.2% lower than its previous forecast – the only country from the 15 which saw a lower figure than before.

Pierre Boels, the ERA president, opened the convention – moderated by Nadine Dereza – before David Rockhill of research company McKinsey Global Institute discussed the need to use technology in rental industry in order to see big growth. He said rental companies would fall behind and fail if they didn’t embrace technology and the impact it was having on the industry.

Bertram likened positive changes in the rental industry to those occurred in car parking. Where once a customer would walk to a machine in a car park and pay for the amount of time they thought they’d need, it is now common practice to download a parking App and pay via your mobile phone, without the worry of running out of time.

Michel Taride of car rental company Hertz International, discussed the similarities and differences of the car rental industry, compared to the equipment rental industry. Claremont Consulting’s Jeff Eisenberg gave an insight into equipment procurement strategies from customers, when using the ERA’s Lease vs Buy vs Rent tool, designed to provide customers with the total cost of ownership figures.

Finally, the four ERA committees – promotion, technical, sustainability and future group – held workshops on the second day of the convention to discuss progress made over the last year, and each provided a summary of their workshops in the afternoon.

The full report will be available in the June issue of IRN.