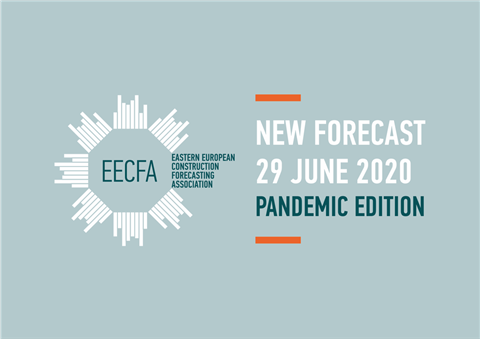 EECFA (the Eastern European Construction Forecasting Association) has released its 2020 Summer EECFA Construction Forecast Report, showing how the economies of the five ‘small’ countries within its South East Europe group have fared somewhat better than their larger neighbours further east.

EECFA described Bulgaria, Croatia, Romania, Serbia and Slovenia as being ‘bruised’ by the pandemic and forecasts a relatively small average decline in construction output of 1.3%.

The group forecasts that Bulgaria could even see a small increase in output by the end of 2020, due in part to the country’s work on the huge TurkStream natural gas pipeline, which will run from Russia to Turkey.

Furthermore, in 2021, Bulgaria’s construction sector is forecast to grow by a significant 9.2%. 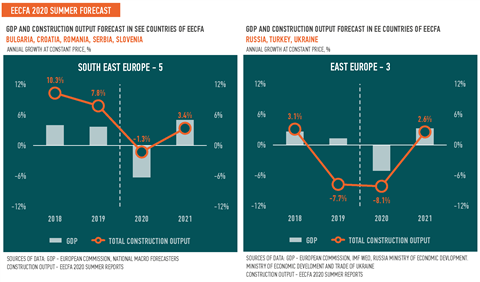 In Slovenia, which went into a full three-month lockdown as the virus spread, packages put in place to boost civil engineering construction are expected to mitigate the downturn, leading to EECFA’s forecast of a 5.5% loss of output by the end of this year, followed by growth of 2.6% in 2021.

Conversely, EECFA says the East Europe countries on which it reports (Russia, Ukraine and Turkey), are set to be ‘hammered’ by the crisis, with, on average, an 8.1% fall in construction output by the end of 2020.

In Ukraine, for example, EECFA reports that no specific measures to aid the recovery of construction have been announced by the government, which could dramatically reverse the four years of growth seen in the industry.

In Turkey, while significant sums have been allocated to aid construction’s recovery, there is concern that the government will no longer be able to progress the numerous ambitious construction projects it has announced in recent months.

EECFA simply describes the Russian economy as being ‘battered’ by a combination of the pandemic, falling oil prices and plunging exchange rates on the ruble.

There, EECFA forecasts a decrease in construction output in both 2020 and 2021.

While both groups of countries should, on average, see a return to growth in output in 2021, that of the three East Europe countries is expected to be relatively small (2.6%), whereas the South East Europe group is forecast to fare better (3.4% growth).