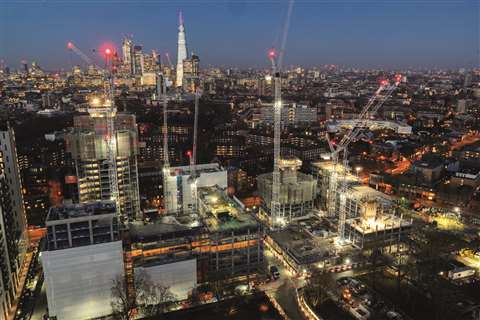 Doka is working on a project in Elephant and Castle in London, England

One of the key requirements for contractors regarding high-rise building techniques, such as falsework and formwork, is to reduce labour requirements and increase productivity.

A survey of more than 135 engineering contractors and consultants worldwide, carried out by the KHL Group and sponsored by RMD Kwikform, found that the two highest rated factors in increasing productivity were the adoption of building methods that reduce labour and the use of formwork and falsework systems that require less labour for assembly and dismantling.

The importance given to using formwork and falsework systems that are quick to erect and strike highlights the role that modern temporary works systems can play.

For instance, this was rated as more important than faster cycle times for concrete pouring and technology that frees up cranes for general site use.

Due to new technology, falsework and formwork companies are offering quicker systems than ever before, as well as improving safety and offering more digital solutions. Talking about how new technology is affecting this sector, a spokesperson from Doka commented, “Developments are taking place at a rapid pace, and digitalisation is further increasing this dynamic. The digitisation of systems and processes holds great potential for making construction more dynamic and faster. 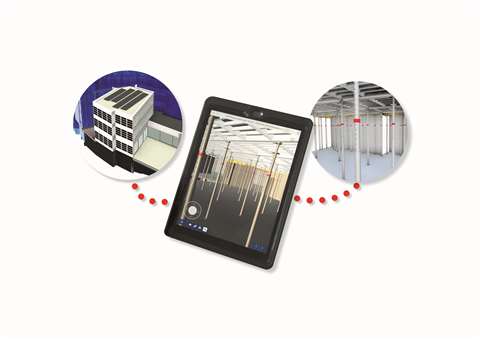 Meva is working on a project with BIM at its heart

“The question of digitisation in construction is inextricably linked with the question of how we can help our customers to build even faster and more economically. Doka is working intensively on this and is focusing on digital solutions that aim to optimise construction site procedures and thus make a significant contribution to increasing productivity on the construction site.”

The digital side of falsework and formwork is an area that Meva is certainly concentrating on, with Building Information Modelling (BIM) a particular focus.

A pilot scheme run by Swiss-based design, engineering and consulting firm Basler & Hofmann AG is currently exploring how a digitalised project and paperless site can be successfully implemented.

In Zurich, Switzerland, the company is adding a three-storey extension to its own existing office block. In realising the scheme, the company itself assumed the tasks of overall project management and design development for all disciplines using the single BIM model and BIM co-ordination. All on-site operations are based exclusively on the digital model.

The contractor approached Meva to become involved in the project regarding the falsework and formwork. The company set about ‘computerising’ its formwork products through its own IT Engineering Services department. To facilitate flexible 3D detailing, models for the individual formwork systems were made available for use in up-to-the-minute design tools. 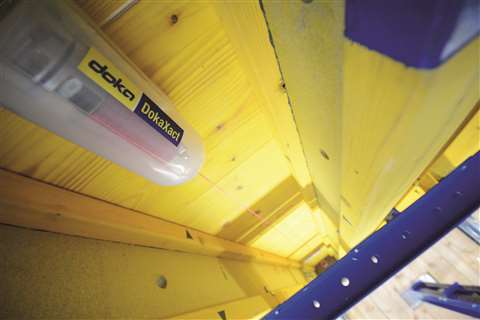 “Particularly for complex geometries, 3D design has the advantage of adding transparency to construction processes and thus making them easier to carry out,” said Michael Estermann, managing director of MEVA Schalungs-Systeme AG in Switzerland. “That’s why we are increasingly adopting these forward-looking solutions.”

In order to construct the 45-hectare Okada Manilla Bay resort in the Philippines, Hilmarc Construction Corporation approached RMD Kwikform to provide a formwork and shoring solution. The Manilla Bay complex is situated in an open coastal area – due to high wind velocities, the use of cranes was limited.

Due to the scale of the project, the contractor asked RMD Kwikform to provide a safe solution that would alleviate the need for cranes or working at height; the company supplied its Airodek system to support the beams, slabs and soffits.

Eric Alfonso, director at RMD Kwikform in the Philippines, said, “Traditionally, a project of this size would utilise a large amount of formwork and shoring, which would have been erected at ground level before being craned into place. However, this was not possible because of the site’s location. It was vital that we provided a solution that did not rely on crane usage as certain loads being suspended above the site could have posed a dangerous threat to the site workers.” 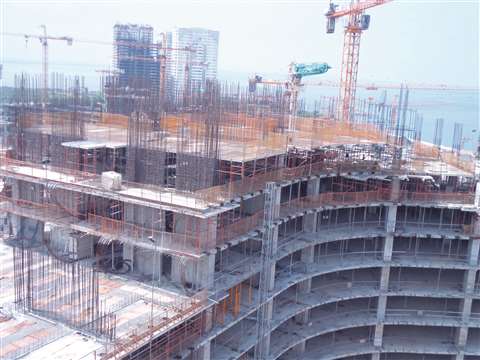 Airodek is said to be a versatile, soffit formwork system that can be installed by hand and is light enough for site operatives to carry. With no additional equipment or cranes needed to erect the Airodek solution, the system was said to be fitted together easily on site to support a range of slanting columns.

“In order to improve the productivity on site, we paired the Airodek system with Kwikstage propping. This included retrofitting 40m steel beams with 19m of shoring. This ensured additional structural support to the slanting beams due to the close proximity to other ongoing works on site,” added Alfonso.

According to the company, Airodek’s lightweight panels and minimal components led to a 30% weight decrease and 40% fewer parts in comparison to other conventional props and timber systems. 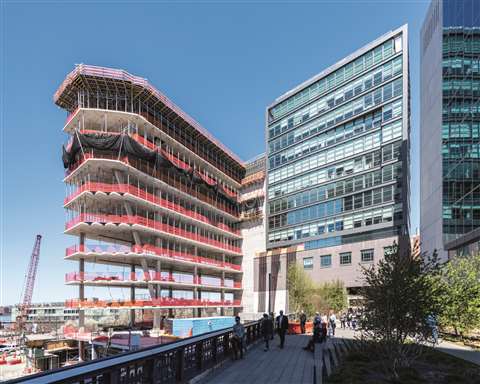 In Manhattan, New York, US, Ulma took part in the construction of the 40 Tenth Avenue Building. The building was designed to have a positive impact on the environment; the façade is covered by glass with sheared corners revealing a truncated geometric pattern and the shearing was guided by the sun’s relationship with the area to minimise shadows. 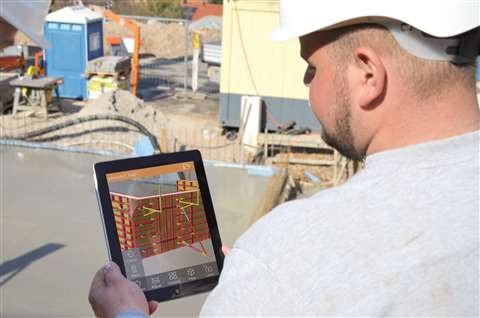 For large slabs with regular geometry and spans between columns, CC-4 slab formwork was said to be the best solution, bringing both security and productivity. The system is said by the company to be easily dismantled without the risk of falls and the panels have incorporated the plywood, facilitating the assembly and dismantling.

For the special architectural perimeter and corner conditions, the Enkoflex system was best suited for irregular geometries to build the non-typical areas. The system is said to be designed with independent and lightweight components to be adaptable to any slab configuration.

One of the issues that international companies face – with falsework and formwork companies no exception – is the sheer number of different rules and regulations in place around the world, and the fact that different regions often have different preferences for how they work.

Peri operate in more than 70 countries around the world and, due to the differences in regulations, the company says that they offer customised solutions. 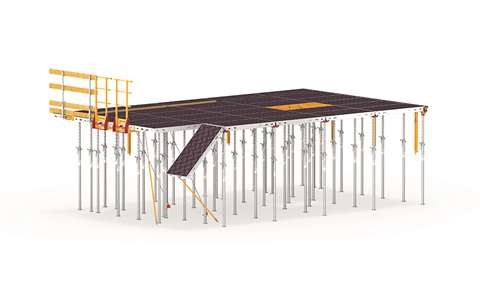 Peri’s Skymax was developed for the requirements of developed countries

The company also highlights the importance of BIM as well as the new software and apps that the company is producing, such as the planning solution Peri QuickSolve.

The new technology is said to be able to replace brick and wooden constructions as it accelerates the construction process significantly, reduces costs compared to standard constructed buildings and allows free forms in the architecture at no additional costs.

At the Bauma Munich show Paschal introduced a prototype for one-sided formwork anchor system, the LOGO.pro system, which is said to offer customers all the advantages of one-sided tie rods. 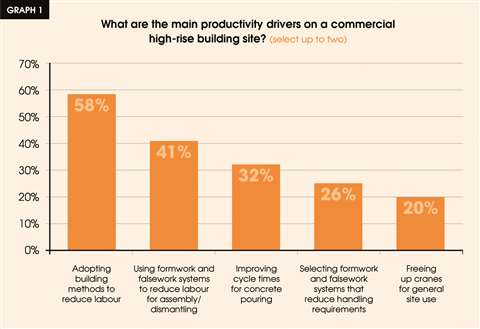 The tie points for the one-sided tie rod equipment can be operated by just one person, leading to less manpower requirements and therefore time and cost savings. Because the formwork can be fully operated from one side, the company says that it guarantees optimised working, even in confined spaces. The new system has the advantage of being able to be anchored either on one side or conventionally, depending on requirements.

The firm has also recently announced that it is working on augmented reality (AR) solutions, as the integration of AR can make a significant contribution in the planning and construction process.

Working together with its subsidiary, Planitec, the company has used the Paschal AR app to make it possible to present the planned formwork solution in original size in real surroundings by means of a smartphone or tablet.

The AR interface makes everything consistent, from the 3D formwork model across all process steps through to the construction site.

The result in the AR app is said to show the respective current state of planning, making formwork easier and verifiable for the construction management team. This is just one more example of how digital solutions are becoming embedded into the sector of falsework and formwork.