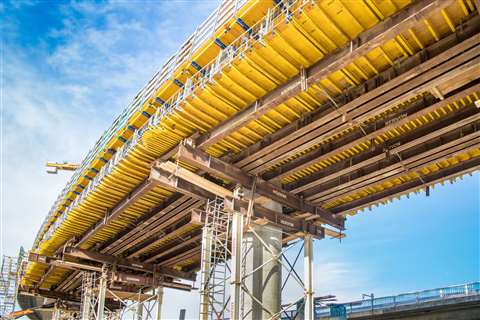 On the Voest Bridge in Austria, Doka formwork is being used in the widening of both carriageways

Falsework and formwork solutions for large-scale or high-rise construction projects in Europe are not only vital and complex elements of the build, they also generally make up at least 5% of the on-site cost.

Moreover, from a safety perspective, it’s imperative that the right choices are made from the outset, while bringing in the right equipment and the right people before construction begins can also pay dividends in terms of productivity.

In Linz, Austria, Doka is working on two bypass bridges on the river Danube, intended to relieve the strain on the heavily congested Voest Bridge.

The company said building four oval piers in the middle of the surging Danube poses a major technical and logistical challenge.

It used sheet pile boxes to create dry space, allowing for the concreting of the base, on which the piers will be built in two sections.

The columns are approximately 15m tall, 4.5m wide and up to 19.7m long and the formwork is made of Doka’s own Top 50 elements, assembled by the company’s pre-assembly service.

Special connection lugs are installed to transfer longitudinal anchor loads, eliminating the need for tie rods on the longitudinal side and through the curves.

The piers are concreted using two different types of concrete to provide an outer area that is resistant to the wear caused by the strong flow of the Danube.

As well as the bypass bridges, Doka is working on the expansion of the main Voest Bridge, with the existing superstructure on both carriageways being widened by up to 9.5m over a 350m span.

The shoring is provided by a combination of Dokamatic tables – which can quickly form large areas of slab – and the Staxo 100 load-bearing tower.

As bridge traffic is being separated during the project, various entry slip roads have to be created. Doka will position more of its load-bearing towers, along with H20 top formwork beams and 3-SO formwork sheet, before the concrete for the 100m-long ramp structure is poured in one step.

Given the speed required and the technical challenge of the project, the Doka site team decided to use special shifting trolleys on castors to enable fast and efficient manipulation of the Staxo units.

Following what the company calls a “successful combination of steel and concrete”, the bypass bridges are expected to be completed by mid-2020. 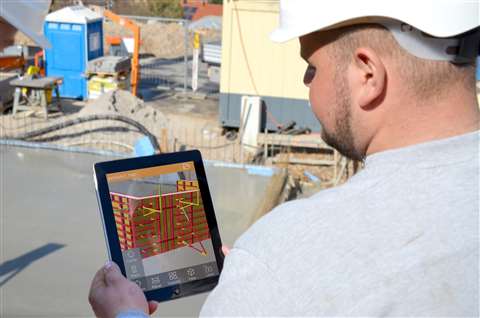 While formwork is not thought of as being a high-tech business, it is, like so much of the construction industry, being driven towards the technology sector by the need for increased productivity and cost-efficiency.

German formwork specialist Paschal is seeking to optimise its planning processes with the use of both augmented reality (AR) and BIM (building information modelling) technology.

The company also says the use of augmented reality can enable the mobile presentation of building plans by visualising the project at the individual construction stages.

Through this ability to visualise projects, Paschal says optimal use can be made of its products and safety is increased on the construction site.

The company has now developed its own

AR app, for both iOS and Android, which displays the current state of planning to

all project stakeholders, making it more verifiable and therefore easier and quicker to progress.

In terms of the development of its hands-on technology, Paschal recently introduced a prototype for its one-sided anchor system, Logo Pro.

The tie rod system can be operated by one person, promising optimised working, even in confined spaces, but it can also be operated conventionally, depending on the application requirements.

The new system is compatible with Paschal Logo 3 as well as Logo Alu and has the same frame profile as these formworks. The accessories for Logo 3 can also be used in combination with the system.

Tie points are designed in the centre of all filler panels and the system includes a 50x50cm rigid outside corner post.

Paschal says the Logo Pro system will likely be launched before the end of the year.

In truth, there is a powerful amount of engineering involved in the creation of falsework and formwork systems, and also in the utilisation of those systems (or the coming together of those systems) on construction sites.

A case in point is Istanbul Airport, which is set to grow from its current 90 million passengers per year to an estimated 200 million passengers in the coming years, with two new terminal buildings being constructed to facilitate the increasing numbers.

In total, 13 different contractors on the project used Peri formwork systems and the company’s products were used to construct, for example, a multi-storey car park, maintenance building, fire station, cargo building, wastewater treatment plant, a subway tunnel and a mosque.

The construction team on one of the buildings used the Trio wall formwork system to construct walls and slabs up to 14m high, with a thickness of up to 1.75m.

Peri said one of the advantages of using Trio is the fact that large units can be moved by crane, saving considerable time on the project.

The minimal number of different components, plus simple connections via Peri’s universally applicable BFD Alignment Coupler also accelerated and simplified what can be complex forming operations with the Trio system.

In addition, the Peri Up scaffolding shielded site activities from ongoing airport operations. Moreover, and given the strict deadlines of the project, Peri used transportation wheels to move platform elements, by hand – and these elements of up to 540m2 were moved as one unit.

Peri said it worked closely with the construction teams on site, delivering large quantities of materials on a just-in-time basis, ensuring smooth and productive workflow.

The team at the site is working on one wing of the building, over a two-and-a-half-year period during which the facades, interiors and the roof will be restored.

The Pilosio scaffolding and temporary roofing systems were installed over the course of three months, by the contractor, Hossor Erecta. A major element was the T76 temporary aluminium roofing system, designed to create a closed and isolated environment and give protection to the delicate restoration works.

Pilosio says the T76 system can be adapted to any type of scaffolding used on site and can offer time savings in assembly and positioning, with reduced weight, the manoeuvrability of the elements and a quick hooking system.

Another important element, says the company, is the modularity of the system’s components, which allows multiple configurations, with standard spans from 8.90m up to 22.40m.

Modular construction systems are currently big news and Meva is citing ease of cleaning, ergonomics and low weight as decisive factors in favour of its improved MevaDec system. 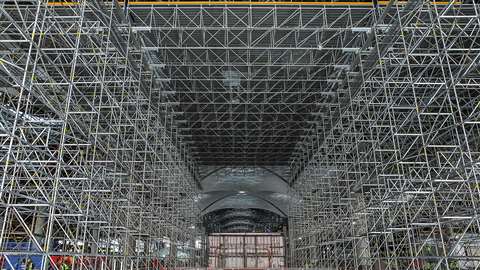 The company says the upgraded cross-section of its MevaDec edge profile, along with a modified primary beam groove, works to minimise concrete adhesion. Additionally, integrated grip profiles and lower weight components aid handling, promising to speed up the construction process.

Sascha Grübel, a site manager for construction contractor Züblin, said of the system, “Early stripping and the resulting reduction of material stock on the construction site provides us with clear benefits in terms of rapid construction process.”

There is a dizzying array of formwork and falsework available for the many diverse projects currently at the planning stage. In fact, procedures and techniques vary almost as much as the equipment itself.

Needless to say, compressing the most important aspects of the business into one document is no mean feat. That said, a white paper on the subject of high-rise construction was recently produced by formwork specialist RMD Kwikform, in association with International Construction magazine.

The document looked at improvements that could be made in this sector, and reports that “labour productivity is viewed as the major opportunity to improve efficiency on sites, whether freeing up workers for other tasks or speeding up time-consuming activities, such as the management of formwork and falsework.”

The white paper discusses the importance of projects adopting effective building methods and formwork systems, with contractors identifying systems that are easy to erect and dismantle as being the number one consideration to help increase productivity levels.

The white paper also raises the need for safer methods of construction to be introduced. However, rather surprisingly, respondents felt that individual workers needed to take more responsibility for their own health and safety. This was rated higher than contractors themselves improving site conditions.

While personal responsibility is clearly important, an employer’s role in providing a safe working environment should be a top priority. The white paper outlines the key role that formwork has to play in helping contractors to achieve this, with systems offering integrated safety features providing a real benefit to sites.

Multi-level safety screens below the deck level were viewed by those surveyed as a good way to improve construction safety, while improving productivity levels and working cycles on facades too. The document discusses the benefits these can help deliver in more detail, as well as how best to overcome the challenge of debris falling in commercial building environments. 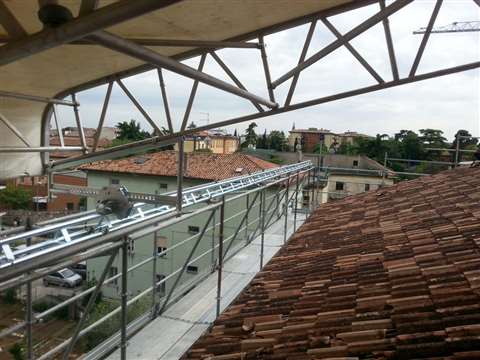 When asked what influences their choice of formwork and falsework system, contractors generally gave greater importance to systems that are easy to erect than those that are lightweight.

In terms of methods of operation, the white paper found that, for high-rise buildings greater than 20 storeys, slip forming is the preferred construction method. Crane-lifted core forming and self-climbing formwork and falsework were the most popular for buildings between 12 and 20 storeys.

Simon Dowd, Major Projects Manager at RMD Kwikform, explains: “Spending on falsework and formwork typically accounts for 5% to 7% of a contractor’s annual revenue – a significant sum. This highlights the importance of properly considering these solutions, and how they can help drive productivity while meeting required health and safety standards.

“Our new white paper has been undertaken with leading contractors and engineering consultants from around the world to really shine a light on this matter, even allowing us to identify regional differences, which has been fascinating to see. The findings uncovered have been invaluable, offering real insights that have then led to clear recommendations on how temporary works can help drive productivity and improve safety for commercial building projects.”