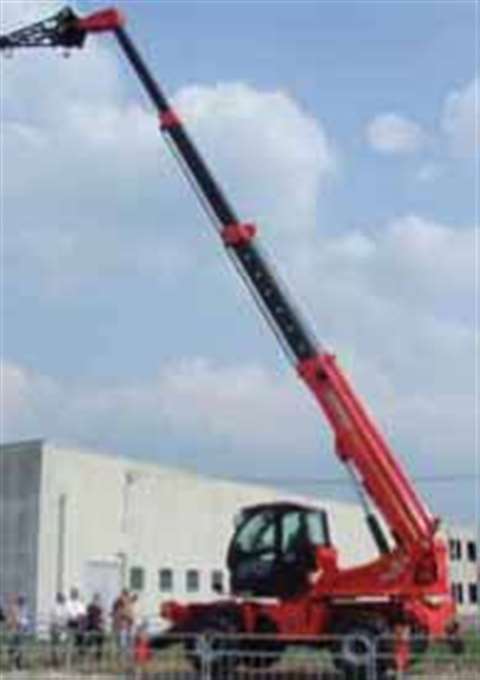 Italian manufacturer Faresin Handlers has revealed the prototype for two rotating boom models, the Storm 18.45 and 15.45, and launched one compact telehandler, the Wallaby 6.25. They are the first new products from the company – part of the Vicenza–based Faresin Group – since it ended its joint venture with Haulotte Group.

The rotating boom machines, which weigh 14500 kg, have a maximum lift capacity of 4.5 t and can lift 3 t to their maximum lifting height of 18 and 15 m. Their control systems incorporate third–generation CANbus (Controller Area Network serial bus) technology that integrates sensors and motion control microprocessors to provide greater stability and lifting effectiveness.

One example of performance benefits, according to engineering manager Luca Manea, is automatic, real–time adjustment of payload limits that are proportional to the position of outriggers, which are infinitesimally adjustable within their span. Use of CANbus also means fewer components and simpler wiring harnesses in the control system, making the telehandlers cheaper to manufacture and easier to maintain.

Their new chassis design is symmetrical about its lateral as well as its longitudinal centre line, putting its centre–of–gravity at the centre of the “H”–shaped footprint of deployed outriggers. Faresin engineers have positioned the superstructure slew axis there, too, to provide constant payload capacity throughout the boom's 360º of rotation when outriggers are fully extended.

This capability, coupled with the safety and convenience advantages offered by remote control, increases the models' attractiveness for use asa crane, said Mr Manea. Unit sales of crane attachments, available with and without winches, are about 25% of telehandler unit sales, and personnel access platform attachment sales are about 90%.

Two–axis symmetry also makes the uni–body chassis easier and cheaper to produce and the telehandlers easier to assemble, according to Mr Manea. The company plans to ship the first Storm units sometime after September and will adapt the new control system to its entire, 23–model telehandler line.