A solid month for materials companies, but equipment hits a bump in the road

This article will assess the period for listed contractors, equipment manufacturers and material producers from week 31 to 36 of 2021 (30 July to 3 September, 2021).

As an average across our key CE indexes, there has been little dramatic movement, with Contractors gaining 0.6% and Materials positive by 1.8%. Only the Equipment index saw a negative total of -2.9%. 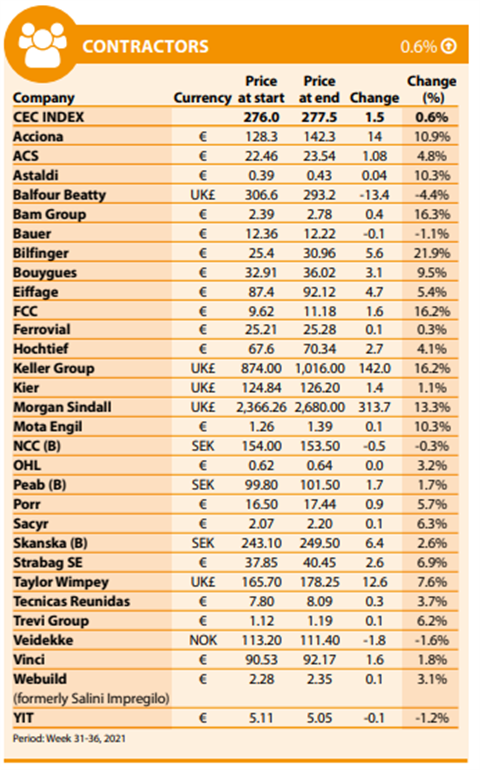 While on the whole, the total positive movement for contractors seems negligible, there is good news to be found, in that of the 29 companies on the list, all but five posted positive results on the index.

In fact, with numerous half-year results having been published in recent weeks, the overriding message is that challenges such as skills shortages and supply chain disruptions are combining to hold back a potentially booming industry.

Germany’s Bilfinger tops the contractors list this month, with a 21.9% gain on the index. Next come three companies seeing almost identical gains: the Netherlands’ BAM Group (16.3%), the UK’s Keller Group (16.2%) and Spain’s FCC (16.2%).

BAM’s half-year results, released in August, showed revenue up 17% (or €521 million up) to €3.6 billion, compared with the same period last year.

The group said that the easing of the lockdowns caused by Covid, along with the company’s cost reduction programme, initiated in September 2020, had resulted in a strong recovery.

Additionally, it said it was seeing strong performance from the Dutch construction and property sectors and good contributions from UK and Ireland.

Despite the positive results, however, the company warned that revenue could be impacted negatively in the future by Covid and also by ongoing supply chain issues.

Going back to FCC’s strong result on the index, there are, in fact, seven Spanish contractors on the CE index and all show gains this month, with even the weakest performer, Ferrovial, just about in the black at 0.3%. 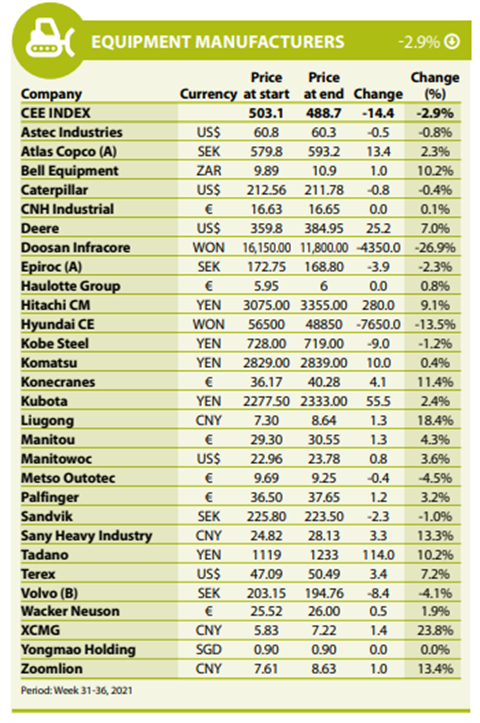 Propping up the index, with a loss of -4.4%, is the UK’s Balfour Beatty. Somewhat perplexing to see the company move into negative figures, given its recently-published and generally positive results.

The company itself described its first-half performance in the infrastructure sector as “strong”, as it revealed an order book worth a total of approximately €18.9 billion – only slightly down on the €19.3 billion it reported for the same period in 2020.

The equipment index is the only one to show overall negative movement, although it should be said that this could stem from sharp reversals for the two Korean companies on the list, Hyundai Construction (-13.5%) and Doosan Infracore (-26.9%).

Clearly, the market has not reacted well so far to the fact that Hyundai Heavy Industries Holdings (HHIH) completed its purchase of Doosan Infracore last month.

Words turning into actions will doubtless improve these companies’ positions within future indexes. 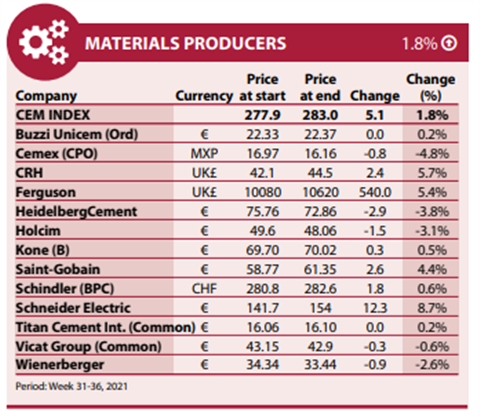 Meanwhile, at the top of the table, sit four Chinese companies: XCMG, LiuGong, Zoomlion and Sany, all with double-digit moves. These businesses are clearly enjoying the benefits of a strong home market, as well as opportunities being seen further afield.

The materials index also sees a small amount of positive movement, but no single company on the list has seen a double-digit change in either direction.

The biggest move is France’s Schneider Electric, with an 8.7% uptick. Interestingly, this year, Schneider was awarded the accolade of being the most sustainable company in the world, out of 8,000 companies assessed by the market research company Corporate Knights.

Clearly, there are benefits to being sustainable that go beyond saving the planet. 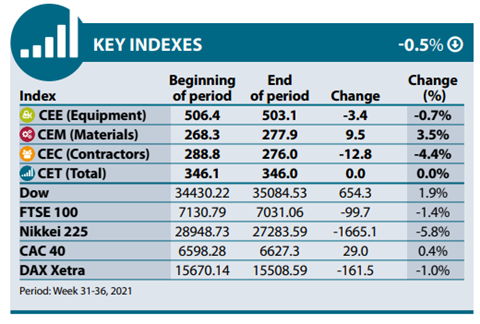