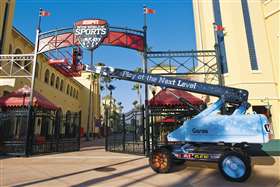 For five years, Genie aerial lifts have been used at the ESPN Wide World of Sports complex in Florida to elevate broadcasters and camera operators above the crowds, and the field of competition, to provide high-angle visibility to viewers. Mark Begonia, production manager for the ESPN Wide World of Sports Complex Production Center, relies on the height and outreach of Genie boom and scissor lifts to help broadcasters get high-angle shots that will transport viewers from their couches to the competition, according to Genie. For example, Begonia says  his team uses Genie boom lifts to get specialty shots on rectangular fields, during football games and soccer matches, because the booms allow the camera operators to reach up and over the field of play. The boom lifts are also stationed in the end zones, elevated 40 feet and up, to capture more shots. During cross country meets, Begonia’s staff uses Genie boom lifts to get the cameras over the tree line so broadcasters and viewers can see the runners on the course. Begonia and his staff use between two and six Genie lifts per broadcast. 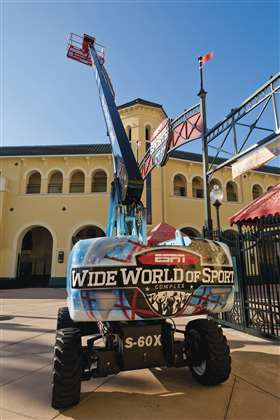 “Our broadcasters and analysts want wide angle views of the players on the field to see and breakdown all of the plays happening for their viewing audience,” said Begonia. “To do that, our production staff has to get our cameras above the crowds and above the fields, at high angles, to capture as much of the action as possible. It is our job to provide a perch for them, high above the sidelines and the end zones, for our videographers to capture footage of the teams in action.

“This means that our cameras can’t be fixed in one spot for an entire broadcast. We need them positioned so that we have the flexibility to adjust their height and angle throughout the broadcast, depending on what is happening in the competition.”

ESPN Wide World of Sports Complex Production Center staff also have used a Genie telehandler to move materials and equipment around the complex.

According to Begonia, an added benefit to having Genie lifts on site is that the complex’s staff can use them in between broadcasts for other tasks, such as camera installation and maintenance.

“We use Genie lifts to mount our stationary cameras on poles,” said Begonia. “And we also use the lifts to clean the lenses on our robotic cameras. Fans watching from home enjoy the clean, clear view of the competition field that we regularly provide them.”