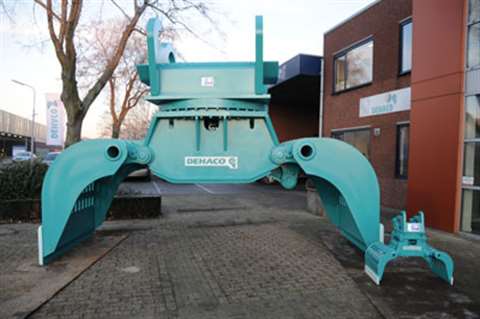 Dutch attachment specialist Dehaco BV has introduced what it claims is the largest sorting grab for demolition duties available worldwide. The DSG13000 weighs in at 13 tonnes and is intended for use on 100-220 tonne carriers. Developed by the company in response to customer demands, the DSG13000 has a 4.4 m (14.4 ft) spread in the open position and a clamping force of 18 tonnes. The new grab operates at 350 bar and requires an oil flow of between 300 and 350 litres/min.

Since 1985, Dehaco has specialised in the provision of a wide range of hydraulic and pneumatic attachments, asbestos rehabilitation and security products.