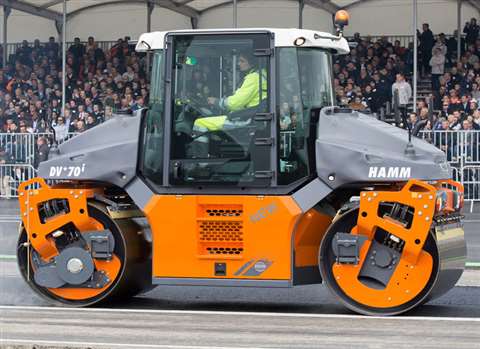 In the tandem roller market segment, Hamm is bringing two new machines to Intermat 2015 – the DV+ 70i and DV+ 90i with all-wheel steering.

The development of the 7 tonne and 9 tonne rollers was said to be based on a wish list suggested by leading construction companies from around the world. Hamm said the machines featured large, fully-glazed panoramic cabs, from where the driver could see the drum edges and edge pressing device at all times. Also, the glazed cab floor provides an unobstructed view of the roller drum.

The rollers were designed with maximum productivity in mind, said Hamm, with the large tank capacity allowing continuous compaction in extended work sessions. The oil, diesel and water replenishment is designed to be user-friendly – hydraulic oil and diesel can be refilled from ground level, and water can be topped-up quickly and safely under pressure from ground level, according to the company.

With its 75kW power plant, the DV+ 90i is said to more than meet Tier 4 interim/EU IIIB, and the DV+ 70i with its 56kW engine complies with Tier 4 final/Stage IV. Both power plants filter the soot particles with a diesel particulate filter (DPF) as part of the exhaust gas purification. Hamm said this meant that the machines were equipped with future-proof technology that could also be used in restrictive markets such as Switzerland.

The new Easy Drive operating concept is said to enable intuitive, self-explanatory operation. It is the result of an extended research and development project over a number of years in which Hamm has collaborated with universities and ergonomics specialists, as well as roller drivers from different countries.

On all three variants, the vibratory drums are split as standard. Series production of the DV+ is projected to begin in the first quarter of 2015, with the machines available from summer 2015.

Hamm is expanding its earthworks programme in 2015 with two compact rollers. The new compactors weigh in at 4.5 tonnes for the H 5i, and 8 tonnes for the H 7i. The company said the new machines were not simply scaled down versions of the familiar H series but rather a totally new series in its own right, designed and developed from scratch.

It said an important innovation was to be found in the traction drive, as the wheels were no longer driven via a rear axle, but via wheel motors. It claimed this concept gave the compactors good climbing capacity and greater ground clearance compared to their predecessors.

The new drive concept was also said to bring another benefit, with the two compactors described as remarkably short. The H 7i, at around 4.40m, is said to be the shortest machine in its weight class in the world. Hamm said the compact design, combined with the three-point swivel joint and a short wheelbase ensured good driving and handling characteristics.

Coates Hire launches 150t capacity structural prop
Lightweight, heavy-duty prop is the fruit of a research project with Monash University in Australia
Loading...
Latest News
Nominations open for Diesel Progress Awards
Awards will be held at the Diesel Progress Summit, which returns to a live event for 2021