Have truck, will travel: What's new in the truck-mounted forklift industry? 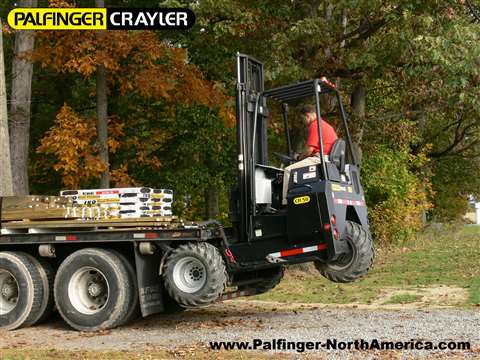 Palfinger's Crayler series of truck-mounted, or transportable, forklifts are available in six different variations. This is the company's CR 50.

What's new in the truck-mounted forklift industry? ALH provides a round-up of the latest equipment and products on the market

For the most part, the truck-mounted forklift industry is dominated by a handful of OEMs, including Moffett, Princeton Delivery Systems, Manitex and Palfinger.

Some makes and models are best suited for flat, even terrain, while others fair best in a rougher environment.

Choosing the correct truck-mounted forklift for your lifting needs depends on the application at hand. Here are the latest truck-mounts available today.

According to Princeton, the PiggyBack can be fitted with a specially designed attachment used to pick up bales of cardboard from retailers and then deliver the bales to the recycling center.

"Using a PiggyBack to deliver green products can save big green bucks when it comes to cutting costs," says Butch Hunter, national sales manager for Princeton.

The PiggyBack operates under its own power and can be mounted or dismounted from the transport vehicle, such as a flatbed truck, or other, in less than 60 seconds, the company says.

"While the ease of transport is an important and distinguishing feature of the PiggyBack, its true usefulness is in the concept," Hunter says. "With a PiggyBack, a delivery driver becomes totally self-sufficient in the process.

He can schedule pick-ups for any time during the day or night. The driver doesn't rely on the use of a customer's forklift at the retail site."

According to Princeton, companies using its PiggyBack have found transportation costs to drop by as much as 10 percent. "Fuel and energy savings from less idle time, and more stops with fewer trucks are just two key contributing factors in saving some green," Hunter says.

"In addition, logistics managers hold their drivers to more consistent schedules since there are no unexpected delays in waiting for a forklift at the retail site."

Princeton also says its PiggyBacks offer true-weather operation with several different models available to meet the needs of almost any recycling operation. PiggyBacks and other princeton models can be fitted to almost any transportation-type vehicle with only slight modifications to the truck.

Lastly, for special applications, Princeton models can be fitted with various attachments.

Manitex's Trailer Mate (TM 50) is the only series currently offered by the company. It is suited, and built for, rough terrains and features standard three-wheel hydrostatic drives. The units are powered by Perkins diesel engines and feature pantograph reach mechanisms which keep the horizontal center of gravity within the stability triangle by moving on the carriage and the load.

"The Pantograph eliminates moving the additional weight of the mast within the stability triangle," the company says.

And electric engine management system allows operators to monitor engine coolant temperature and engine oil pressure and if a damaging level of either is reached, the system automatically shuts down for safety.

The Trailer Mate features center seating, placing the operator directly behind the center of the mast, which provides the operator clear visibility and reduces product and machine damage, Manitex says.

Lastly, the Trailer Mate series has frame-to-frame mounting, which combines the frame of the truck or the trailer and the chassis of the Trailer Mate to support the weight of the unit during transportation.

The CR 45 was developed for single axle trucks or when maximum payload is needed, the company says. Using a Deutiz air-cooled, 48 hp engine, it covers terrain easily with 26 by 12 by 12 inch tires.

The unit comes standard with a 122-inch mast but also has a 143-inch mast as an option. Various attachments, including pallet, brick, block and lumber forks are available and with a 4,500-pound lift capacity, there's enough strength to lift heavy loads.

Palfinger's CR 50 uses a similar Deutz air-cooled engine, but at 64 hp. The unit features poclain twin lock one piece wheel motors to power through terrain with its 31 by 15.5 by 15 inch tires. The unit can lift 5,000 pounds and rolls off the line with a 122-inch mast. A 146-inch mast is an option.

The CR 50 Palreach is a small area's best friend. The unit features everything the CR 55 does, but has the added ability to extend 45 inches across the ruck bed for unloading materials in tight job spaces.

The CR 55, meanwhile, has all the features of the CR 50, but with an added counterweight to give it a larger lift capacity at 5,500 pounds.

If you're looking for a more rugged, all-terrain machine, Palfinger's CR 55 4-way might be the right model. The truck-mounted forklift is best suited for hauling and placing building materials through crowded work areas by having the ability to turn its wheels sideways.

The CR 55 4-way has a lift capacity up to 5,500 pounds and has a center-positioned operator's seat for easy on and off access.

Palfinger's biggest truck-mount is the CR 65 that provides 6,500 pounds of capacity. It is made with the same features as the CR 50 and CR 55 truck-mounted forklifts, including the 64 hp diesel engine. But unlike its brothers and sisters, the CR 65 has a 10-inch longer wheelbase, no counter balance and a load mast rated for its bigger capacity.

Hiab-owned Moffett manufactures a load of truck-mounted forklifts, with 16 models currently available from the company. Moffetts have a different system for their forks called the Moffett Smooth Ride Mounting Kit which is what loads and unloads the unit. All feature all-wheel drive and conform to the requirements of ANSI B56.6 for rough terrain forklift truck.

The company's TM55 is quite different from other models as it features a boom in which its forks rest. The unit features a 5,500-pound lift capacity and is powered by a 50 hp engine. It has a standard lift height of 135 inches. The TM55 is best suited for building materials, agriculture, roofing, scaffolding and recycling.

The M50 from Moffett, released in 2009, features hydrostatic steering and a width of 97 inches. The unit can lift up to 5,000 pounds and lift up to 78 inches. It is available in a light (M50 Lite) or standard (M50 Standard) version, depending on applications. The M50 is best suited for paper bale collection and recycling.

The unit is hydrostatically driven with full-time three-wheel drive and features a side-mount operator station. The STM's new mast design features higher capacity load rollers and corrosion-resistant lift chains, and the company also improved on the carriage, which has been upgraded to a Class III with a width of 48 inches.

The frame's overall opening increased from 57 inches to 60 inches.

The unit is powered by a Kubota 4-cylinder, 50 hp, water-cooled diesel engine and its forward-reach capability enables one-sided unloading of both trucks and trailers. Its made for rough terrain and can be used as an all-purpose machine, Sellick says.