Konsag, a building conservation specialist in Switzerland, has ordered a Puma 42GTX from Teupen Maschinenbau 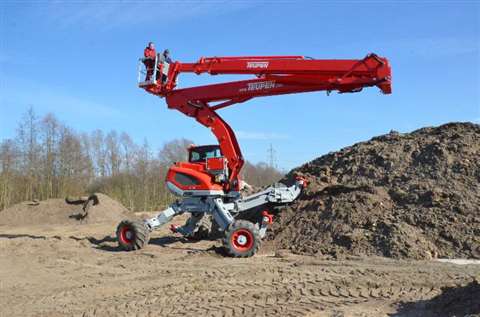 The company said it would use the 42.7m working height ultra-rough terrain lift as an all rounder in its fleet. “The Puma can be used like a boom lift or a truck mounted aerial platform, but its ability to adapt and cross-country mobility is unique,” said Michael Wys, founder of Konsag.

Launched in 2016 at bauma, the Puma is a unique combination of a Menzi Muck walking excavator chassis and an aerial work platform, based on Teupen’s Leo series of tracked lifts.The unit will be equipped for the first time with a W135M cable winch, with mooring function for extreme terrain.

With the investment, Konsag hopes to increase its customer base in the applications such as ropeways, mobile communications, power lines and rockfall protection. Traditonally these jobs have been carried out by climbing or with helicopters. Using the Puma means these applications are less expensive and safer, said the manufacturer.

Konsag Holzkonservierung und Bautenschutz was founded in 1985 to provide construction conservation and expanded into wood preservation and the drying out of buildings and water damage remediation. In February 2007 it acquired its first MEWP and an additional related branch was opened. The company now has 15 units in its fleet.

Konsag’s new Puma will be used at Jungfrau, Europe’s highest railway station, which is based in the Alps and is 3,454m above sea level.