Epiroc hammers were specified for a major project in Gran Canaria

Attachments from manufacturer Epiroc were provided for the demolition of a wastewater treatment plant in the UK.

Ivan Lynn of IJ Lynn & Sons said: “We’ve been using the new breaker and grapple to demolish a wastewater treatment plant and then remove the waste from the site.

On the Spanish island of Gran Canaria, road construction work is being carried out on a new section of the GC-2 motorway in the northwest of the island. 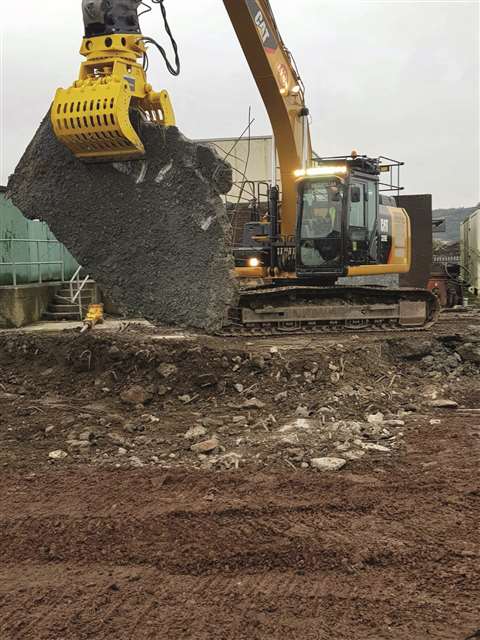 Manager Ignacio Trujillo and the director Juan Monagas said that Epiroc hammers they have been using currently represent the best option for the work, thanks to the saving in time and cost that they offer, as well as the total cost of ownership of the equipment itself.

The new stretch of motorway, which replaces the old GC-200 regional motorway, will include eight tunnels, two viaducts and three junctions.

The tunnels alone total of almost 5.5 km (3.4 miles). The subcontractor faces a complex situation as the project is on a mountainous terrain with numerous ravines and cliffs. For locals, the new motorway is welcome, since the old route was dangerous and experienced constant landslides that often left the village of La Aldea cut off from the rest of the island.

The Epiroc HB range of hydraulic breakers offers nine models that are suitable for carrier machines from 22 to 140t. The exclusive intelligent protection system (IPS) – which combines the well-known Epiroc AutoControl and StartSelect functions – automatically adapts the behaviour of the hammer to any working condition.

Purkupiha has long history in demolition but still this was quite a challenge. The area of Merihalli is greater than that of four football fields and is in the city centre of Helsinki. It was built between 1970 and 1990 and it was very important to carry out the demolition in a certain order, said Santeri Karell from Purkupiha.

Another big issue was the transportation of material, with 90% of all material being recycled. All concrete was pulverised immediately on the job site, with a recycling rate of 95%, half of the metal was recycled, wood and plastic was delivered to power plant and burned, roof material was sent to recycling plant and used to asphalt production, and more than 100,000t of material was handled in total.

Green said the fully hydraulically operated Red 025 breaker is very reliable and efficient hammer for demolition applications. Movement of tool is achieved by the hydraulic oil pressure on the piston head and speeded up by the oil and gas load of the accumulator on the top of the piston. Red breakers are reliable choice for demolition contractors due to minimum service and strength.

Idromeccanica’s range of IMI hydraulic breakers is suited to the newest machines up to 50 t equipped with pressurised oil plants. They are used for several applications such as standard excavations, foundations, demolition of concrete works, quarrying, tunnel excavation and for many other jobs besides being able to work underwater according to customers’ needs. 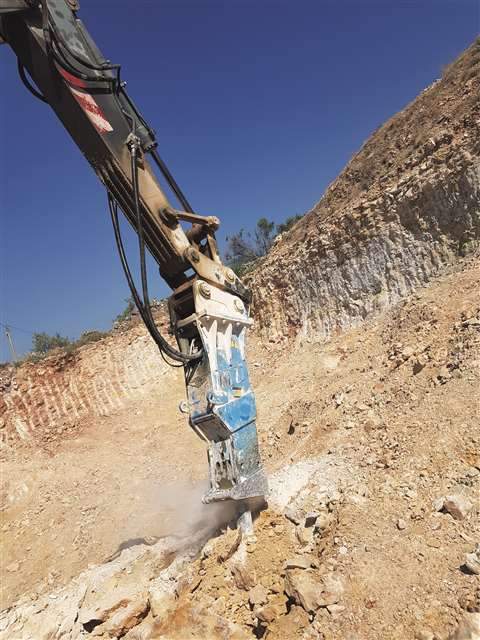 At Idromeccanica there is a range of hydraulic plate compactors/pile drivers to suit machines up to 20t. Compactors are usually used to compact excavation filling materials, consolidate slopes and prepare a solid base for road paving. Idromeccanica’s compactors are a two-in-one as they can also be used as pile drivers as the lower plate is bolted on and is therefore easily interchangeable. To complete primary and secondary demolition jobs, Idromeccanica offers a selection of hydraulic shears, crushers, selection grabs and buckets. Customers can also find replacement parts for the most well-known brands of breakers besides being able to manufacture any part upon drawings or samples.

“The Rockhit has more than three times the energy of a conventional breaker and doesn’t need to hit as frequently so the noise is much more tolerable.

“It also uses less fuel and does not need to be constantly greased.” 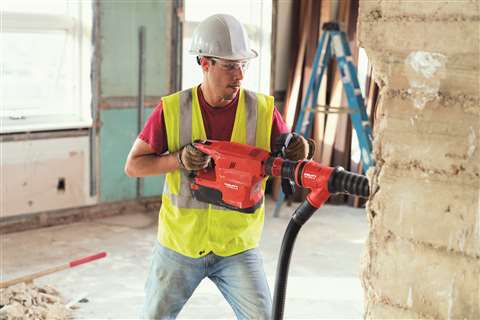 Hilti has expanded its cordless tool offering with the addition of the world’s first cordless breaker, the TE 500-A36. Specifically engineered for the challenges associated with breaking concrete and masonry, this new tool gives construction professionals the power of a corded breaker with the mobility and productivity of a cordless solution.

Powered by the strongest and highest capacity (36 V 9.0 ah lithium-ion) battery in its class and a high efficiency brushless motor, Hilti said the cordless breaker delivers unmatched power, performance, and reliability. The tool includes Hilti’s exclusive Active Vibration Reduction technology, which reduces the tool’s triaxial vibration over 30% compared to the competition and helps keep contractors productive. Couple it with the VC 75-A22 cordless backpack vacuum system for an OSHA compliant virtually dustless solution that allows users to fully cut the cord.

“We introduced 36-volt cordless tools nearly 35 years ago, and our longevity in cordless leadership and battery innovation is a testament to our commitment to solving our customers’ challenges. The world’s first cordless breaker is a great addition to our growing, cordless solutions as we continue to service our customers’ needs.”