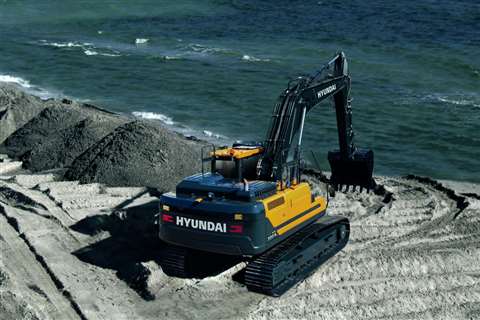 The machine’s bucket breakout force is 192.2kN and its tail swing radius is 3,120mm.

Some of the machine’s new features, highlighted by Hyundai, include:

Hyundai says the new excavator, and all A-series excavators, will now incorporate several new service features that have been developed and tested with the aim of improving machine uptime.

The HX300AL has a Stage V-compliant Cummins B6.7 engine with an all-in-one exhaust after-treatment system, which combines an exhaust muffler – integrating the diesel oxidation catalyst (DOC), the DEF injector (SCR) and a Diesel Particulate Filter (DPF).

Hyundai says the engine has no need of exhaust gas recirculation (EGR) due to improvements made by Cummins in complementary technologies.

Peter Sebold, Product Specialist at HCEE, said, “One of the standout features of the new HX series is named EPIC, and rightly so. The new Electric Pump Independent Control (or: EPIC) is an energy-saving technology that reduces the pump flow rate during levelling and truck loading operation by controlling the pump’s displacement individually.