Construction of ’The Reach’, a building extension to the Kennedy Center for the Performing Arts in the US, was recently recognised by the American Concrete Institute for its innovation, which included a special formwork concept developed by Peri. 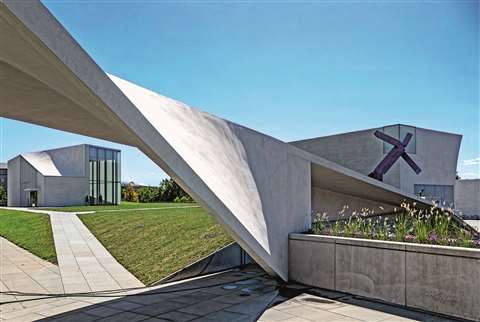 The Reach comprises three interconnected pavilions that stand out due to their exceptional architectural design and highest-quality concrete. The project won the American Concrete Institute’s Overall Excellence Award in October 2020 for uniting creative techniques with innovative technologies.

Located in Washington, D.C., the three pavilions of the building extension were constructed along the south side of the existing structure. The open studios span numerous exterior and interior spaces, providing venues for rehearsals, performances, and works of art. The design of the studios is characterised by distinctive, clear-cut lines and sweeping curves.

The Skylight Pavilion is the largest of the three structures and its 12.9m high ceilings and wave-shaped wall make it a highlight of the project. The wall has a continuous curvature that runs both vertically and horizontally. As such, every free-form box supplied by Peri needed to be custom-designed. In practice, this necessitated the development of a 3D model that could create a virtual depiction of the wall, thus paving the way for the development of project-specific Peri special formwork.

It became apparent during the test phase that the fresh concrete pressure would be comparatively high at around 100 kN/m², bringing with it high reaction forces for the two stop-end systems on each side of the Upper Glissando Wall. This resulted in a stripping force of over 120 kN and a horizontal force of over 420 kN in the uppermost concrete section. Since the two forces were working in opposite directions, they did not cancel each other out due to the differently positioned points of application, but led to a twisting of the stop-end.

These significant demands called for a far stronger stop-end system than what is typically required. The solution: Heavy-duty standard products from Peri, such as the RCS Rails, were used. In this way, a torsionally stiff yet cost-optimised system could be used, which was held in position by anchors in the ground.

A tension-compression system (TCS) designed by Peri engineers was used to connect the panels horizontally so the load could be gradually transferred to a supporting structure system instead of to the adjacent panels. This prevented the panels from being overloaded.