Kings of the Hill: masters of all they survey 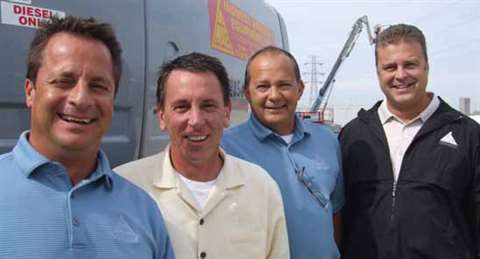 Creating Midwest Aerials & Equipment 10 years ago required visits to almost 50 banks and a lot of hard work by the founders. Today, it is a Missouri staple. John Wyatt reports

Driving around the “old neighborhood” with Dan Tumminello, president of Midwest Aerials & Equipment, is a gas. For one, the guy knows a lot of people in St. Louis, and in particular its neighborhood The Hill.

He says he grew up five houses down from the city's current Mayor Francis Slay and knows relatives of baseball legend Yogi Berra that still reside in the area. Headed to lunch on an October afternoon, we stop to chat with some of locals of this neighborhood, among them the mayor's brother in law. At the Italian restaurant the night before, Tumminello is greeted by name. It seems Midwest Aerials & Equipment and its owners are community favorites.

The Midwest Aerials & Equipment team has prospered in Missouri's largest city. Not even a decade old, it is now one of the top independent rental yards (as rated in number 17 in the ALH 20/20, in the September/October issue) in North America and boasts three locations in three of the state's major cities: St. Louis, Kansas City and Springfield.

Next year, it will launch a parts and service center, operated out of its St. Louis location. While the company says it has been shown interest from the consolidators, Midwest Aerials & Equipment will have none it. In fact, the company has sought camaraderie with other independents nationally, even throwing business to colleagues in neighboring states.

The company's growth is a far cry from 10 years ago, when Tumminello and business partner Kevin Morrell were trying to persuade banks to back their financial endeavors. The company credits MEC and Skyjack the patience they exercised while the entrepreneurs scouted for backing by its banks. Visiting its 48th bank, Midwest Aerials & Equipment finally got the loan they needed.

“We kept reporting to them [MEC and Skyjack] on the banks we were visiting ... it was about nine months until we got the loan,” says Tumminello. “We walked out of the bank with enough to pay for those machines and order another 110 machines. We got those machines and put them out relatively quickly, then looked at each other and asked, 'What are going to do now?'”

By its third year, circa 2000, the company had approximately 500 pieces and brought in Dan Martino and Joe Alonzo Jr. as co-owners. What the company did was follow its 90-page business plan, growing at a healthy level and racking up more equipment. In 2001, the company bought more than 700 machines and opened two stores.

Currently, the company has three stores, more than 80 employees (including 13 to 14 sales staff) and is approaching revenues around $30 million. From any one of its locations, Midwest Aerials & Equipment will travel a perimeter of 150 miles, servicing Missouri, Illinois, eastern Kansas and northern Arkansas.

The trip hasn't been without hardships. Post 9/11, the company says it went down to 50% utilization and took another year-and-a-half to get back on its feet, in the meantime paying down debt and trying to build its fleet again.

The biggest news the company reports is the upgrade of its downtown St. Louis facilities to enable it to extend the customer services it offers. This will add another 4.5 acres of land, which includes 8,000 more square feet of office space and 12,000 square feet of warehouse space. This extra room will allow the company to install a complete parts and service station, which will include a spray booth and more area for parts inventory.

“We're going to service customer-owned equipment in the field and in the shop,” says Tumminello. “We're going to extend the life of equipment, refurbish. And then we'll have the parts online that is not just for Midwest Aerials' stores, but nationwide.”

The four co-owners do attribute a lot of their success to the ideas that everyone contributes. “Some of the best ideas that we use everyday, regarding improving efficiencies, all down the line are from the employees. It's not that we're just geniuses walking around,” says Dan Martino, director of operations.

Talk turns to shop and ALH asks Midwest Aerials & Equipment about some recent news events in the industry. As the UK's Tanfield Group announced this summer, it acquired Snorkel, which will merge that company's range with Tanfield's UpRight.

“On the service, I think it's good for Snorkel because it gives them another capital base to work from,” says Morrell, who quit his day job as a commercial real estate agent to venture with Tumminello, and serves as vice president and CFO. “It's something they want to grow and stay in the business. How that's going to work with the acquisition, I don't know.”

Tumminello adds, “We've been a big Snorkel user in the past. It will be a good thing for them and we continue to buy Snorkel stuff.”

What about CareLift's ZoomBoom line, which was acquired by Skyjack's parent company Linamar this summer? Midwest uses exclusively the Skytrak and Lull line of handlers, and some Genie's to boot. The company doesn't appear to want a mish-mash of different handlers in its fleet, as it makes parts inventory more congested and cluttered.

“You have to watch it or else you're adding an addition just to stock more parts,” says Martino.

“We've added more products that we feel the manufacturers are strong in. Manufacturers' aren't strong in everything necessarily, so we've taken the best of everybody and acquired equipment on those lines,” says Morrell, who says the company is cautious jumping into new product lines, though he adds that the company has “stepped up” and purchased some Skyjack booms.

This year, the company has invested in $50 million in equipment for its fleet, and now has a total of 2,050 units in its fleet, with 400 of that figure being purchased this year. The company is also a Skytrak dealer.

“We do have agreements with JLG for the telehandler line, which allows us to buy very competitively but that's the exclusive product we carry,” says Morrell.

Currently, the company has 1,200 active accounts, though Tumminello believes there are approximately 1,500 that are open. The company's Director of Sales Joe Alonzo Jr. says the company is growing at 22 to 25% each year. As other rental yards have also forecasted, the next couple years look promising in terms of rental and sales activity for the company.

What is the competition like? Alonzo says Midwest Aerials & Equipment has a fair market share in all three locations. “Probably every town that we're in, there are different competitors that are more aggressive. We may have Hertz here [in St. Louis] but we never really see them; but in Kansas City, Hertz is our toughest competition. So, there's no consistent competition in each city,” he says.

Midwest says it doesn't see itself as getting to the point where it would want to buy out the competition. “We're not going to pay a premium for something we can do ourselves,” says Morrell.

The company's confidence comes from its claim that it's on-call 24/7. On each employee's business card is a direct line, cell listing and Nextel number. Tumminello says on Independence Day, he took a 28 piece order at a Missouri amusement park.

“A company called us because all of our competitors were not answering the phone on July 4,” says Martino. “I flipped on the computer at home, typed the contract from my house, called the mechanic and driver, he called the customer back and it was done.”