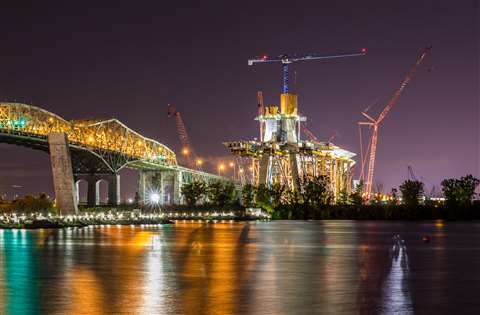 Linden Comansa on the New Champlain Bridge by Paul Eifert

Construction is progressing on the New Champlain Bridge in Montreal, Canada, with the help of a tower crane from Linden Comansa.

The Spanish manufacturer supplied a 25 tonne capacity model 21LC550 flat top tower crane to help build the main pylon for the new bridge which will be 170 metres tall. It will lift precast concrete elements and formwork panels.

Work was started in 2015 by the Signature on the Saint Lawrence Group, a joint-venture between SNC-Lavalin, ACS and Hochtief. The new bridge runs parallel to and just a few metres away from the current bridge, which is still open to traffic. In September 2017 the crane was erected on the deck of the bridge to a height under hook of 67.8 m. Its final height will be 180 m from the base of the pylon and 123 m from the bridge deck.

The old road bridge opened in 1962 and is the country’s busiest with an average of 136,000 crossings a day. Montreal’s inhospitable climate and salt spread on the roads led to progressive deterioration that maintenance and repair plans were unable to stop so a new bridge was needed.

Completion of the new bridge is due by December 2018.