Equipment manufacturer LiuGong North America used the recent National Demolition Association Live Demo event to show its 950 high reach demolition excavator as it targets an entry into the US market. 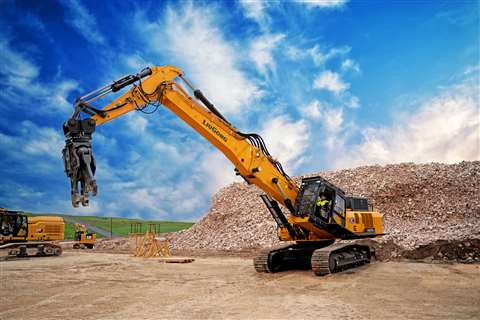 Having shown the excavator on the European stage at Bauma in Germany last year, the company now aims to combine Chinese backing – its parent company is worth $4 billion and has been in business for more than 60 years – and British manufacturing expertise and experience across the Atlantic.

It has also collaborated with specialist machine modifier Kocurek to make products more applicable to the needs of North American customers, and partnered with Cummins to provide the engines for the products.

The 950 was shown alongside the company’s 936, covering a range of demolition excavators from 10 to 50 t. It includes a high visibility cab that was demonstrated in the US for the first time at Live Demo.

“As an organisation, we have been making demolition products for years and years, in the United Kingdom, in China,” said industrial segment manager Tim Gerbus.

“A lot of people were surprised to see us at Live Demo, but the first North American case study could be very soon.”