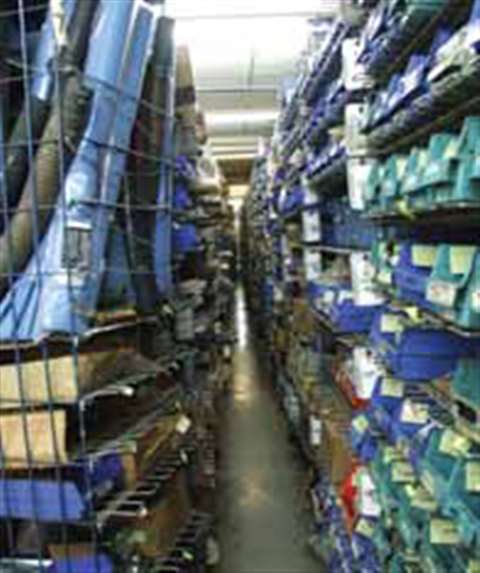 In its warehouse, the company installed a carousel for easy access to parts and components. There are a total of three carousels.

Canada's Load Lifter is best known for its rough terrain, vertical mast forklifts. But now, the company is expanding its range of forward reach telehandlers and has its eyes on growing its US sales. John Wyatt reports from Toronto.

Load Lifter is gearing up for big moves. Next year, the Toronto-based manufacturer will be moving to its new, larger facility in Uxbridge, Ontario and is set to introduce three new telescopic handlers into its existing family of rough terrain forklifts. At the same time, the company – founded and still owned by the Thomas family – is planning a big increase in its US dealer network. The developments are indicative of another shift, as the second generation of the Thomas family step up to take a bigger role in the management of the company.

Load Lifter's President and Founder Hedley Thomas – originally from England but now a long-time Canadian national –designed and launched in 1976 a four-wheel drive, rough terrain, vertical mast forklift that became the 4400 Series, a durable machine that could survive the often harsh Canadian climate. Since then, the company has also offered vertical masted machines ranging from 4,000 to 30,000 pounds with lift heights from 8 to 30 feet.

“My concept on forklifts is that it has to be easy to maintain and service,” says Thomas. “People don't think about serviceability and coming from a service area, I know the problems.” His goal was to use only three different sizes of bolts on the machine so the mechanic had all the wrenches in one hand. “If you're a mechanic, you know the reason why,” he says.

In 1982, the company introduced its first forward reach telescopic model, the Reach. This handler was a success in the Canadian market, according to the company, more so than in the US market.

This summer, the company announced the release of its new 4400 F Series with the 4414-20 straight mast model, which replaces the 14-year old D Series models. The four wheel drive/four wheel steer unit has a capacity of 20,000 pounds and a stronger cab and with more emphasis on operator visibility. The company is primarily marketing the machine in North America, though the unit is available globally. Load Lifter already sells machines to the US and Canadian armed services.

Now, the company has five different series with 28 variations. Load Lifter 2200, 4400 and Reach models are scattered throughout the Toronto construction landscape. As the largest metropolis in Canada, it's a great market to be in the thick of, as Toronto is home to 8 million and growing. And unlike on US soil, the Canadian residential market doesn't appear to be weak; both the city and suburbs of Toronto are growing with homes. Brick is the common cladding on these units, which makes a heavier rough terrain forklift ideal for many bricklaying contractors. The company also says its machines are big in the area for lifting trusses.

Hedley's sons David, Donald and Paul are now taking a greater role in the company. The son's are also heavily involved with the family rental business, Stanmore Equipment, which began in 1962. It was the success of Stanmore that allowed the creation of Load Lifter, which became incorporated in 1976. The rental yard carries several telehandlers and vertical mast machines, yet is also a one-stop shop for the area's masons. The company supplies scaffolding, planks, mortar mixtures – “everything but the sand and cement,” says Thomas.

This spring, the company will move from its location of the past 20 years to a 10-acre spot in Uxbridge. David Thomas is overseeing a large part of the construction of this plant. The company simply outgrew its current facility and with more product ranges planned the extra space was sorely needed.

The new facility will house all engineering, R&D, vehicle testing and full manufacturing capabilities, says its Operations Manager Dave Tughan. When the construction is complete, the company will have a combined total of 100,000 square feet unit between its existing facility and its new location (70,000 alone for the new facility). The company says approximately $6 million has been invested in the Uxbridge location.

One of its features will be a spray booth, which will offer powder coating. Although more expensive than the traditional spray painting, the company has to meet stringent environmental codes. “We opted to start powder coating our machines, mainly because of environmental concerns,” says Thomas. “It's very expensive, but very durable.”

Three new models will join the current 8,000 pound Reach model: a 6,000 pound machine, lift height of 42 feet, and two 10,000 pound machines with 42 and 56 feet, respectively. The first prototype of its new telehandlers, probably one of the 10,000 pound models, will be finished before the move to the new facility. The company says the machines are built with the operator in mind, as the cab features strong ergonomics for the operator and high visibility.

The company views its booms as one of the strongest in the industry: “If you look at our machines, our boom is very strong compared to other competition. If you look at our 842 Reach 8,000 telehandler, it looks like other 10,000 pound machines out there,” says Tughan. “I think the fabrication on how we build it is why. There's a lot more support structure where our boom is anchored to the machine. If you were to look at our pin sizes and how it's anchored, compared to others in the industry, I would say ours is much heavier.”

“With building a new facility and our company philosophy, we want to take this company to another level,” says Tughan. “It's a very competitive business, but we feel with our real hands-on attitude and the way we design things ... we are able to produce new machines and bring them in the market a lot quicker than our competition.”

In regards to being a “hands-on” company, Tughan knows. He began with Load Lifter in 1977 in its shop as a welder. He says many of the employees similarly started out in the shop, thus giving them experience in the manufacturing of products, as well as office experience.

Not only does the company face an already congested market in telehandlers, but the poor exchange rate of the US vs. Canadian dollar. “This exchange thing with the dollar right now is not going to help – it's $1.10 currently [as of early November]. Our commodity-based economy is causing the speculators to buy Canadian funds, which is increasing the value of our dollar. The history with the US dollar has been reverse. Now it's completely flipped around,” says Tughan.

Given this challenge, the company's solution to introducing a new line of handlers and penetrating the US market is simple: Good old fashioned hard work. “We'll have to weather the storm the way it is now and continue to work harder, be more efficient. But the new plant will have more automated equipment to help us do things better,” says Tughan.

Load Lifter does have distribution representation in the US, but it is a small network. According to Tughan, the company has representation across the eastern seaboard from New York to Florida, yet its hopes are to have more in the west. He says overall, the company covers approximately 30 to 40% of the states, which under the company's business plan should grow with the addition of its new telehandler models.

“We don't like to set up dealers with just a bunch of literature in the rack,” says Hedley Thomas. “We want true dealers that have our equipment and can service them.”

The company says it will not be attending next year's World of Concrete or the Rental Show in Las Vegas. However, the company is considering exhibit space at ConExpo and if that's the case, the company will “definitely” be bringing its new handler models.

With Load Lifter making its move towards the US, the Canadian market is performing well for the company. As of now, the company says western Canada has been very strong, and in Alberta in particular, the company has several machines up in the oil sands area. But with a new facility and new products lined up, the team is beaming with confidence.