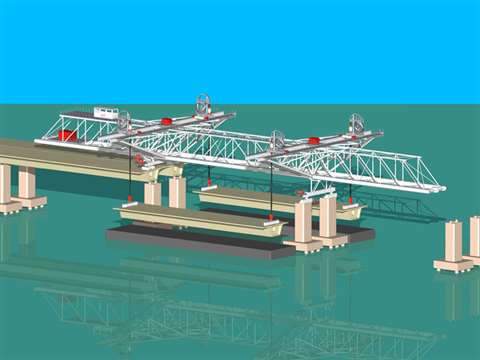 The gantry is designed to erect viaduct sections up to four decks wide at a rate of up to one bridge span per day. It weighs 840 tonnes, measures 130 m long and spans 54 m

UK-based Dorman Long Technology, a speciliast in developing and operatering technology for modular construction projects, has been awarded a contract to supply a 1,740 tonne capacity bridge deck erection gantry for the Temburong Bridge Project in Brunei

The contract was awarded to Dorman Long Technology by main contractor Daelim-Swee. The gantry is designed to erect viaduct sections up to four decks wide at a rate of up to one bridge span per day, a company spokesperson said. It weighs 840 tonnes, measures 130 m long and spans 54 m. It will include two 870 tonne capacity bridge deck erection gantries, which will be used to simultaneously erect two 870 tonne precast concrete bridge deck girders. The girders measure 50 metres long and will be installed on a 13.65 km long marine viaduct across the Brunei Bay.

To construct the bridge, the girders will be moved into position by barge. Four strand jacks, supported on either side of the gantry main truss, will be used to lift the girders before they are moved sideways into final position and set down on the bridge bearings, a spokesperson said. Once complete, the Temburong Bridge will connect Bandar Seri Begawan with Temburong.

“A system of secondary hydraulic rams will be used for the sideways movement,” the manufacturer added. “The final alignment and a hydraulic bleed lowering system are used for final lowering onto the bridge bearings at a speed of less than 1 mm per second. All these hydraulic systems are monitored and synchronised using a central computer control system that has numerous safety interlocks and full data logging of all operations.”

The gantry is scheduled to be delivered in April 2016 and will be in operation on the project for two years.