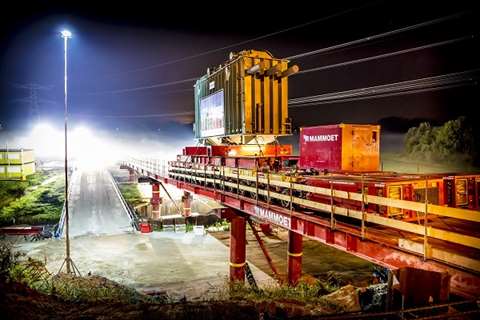 Mammoet has transported a large electrical transformer to Breukelen

Mammoet has transported a 325 tonne electrical transformer to a high voltage substation for TenneT, a Dutch electricity transmission system operator. Mammoet moved the transformer, constructed by Royal SMIT Transformers in the Dutch city of Nijmegen, across two of the busiest thoroughfares in the Netherlands.

TenneT is currently expanding the electrical grid in the Breukelen-Kortrijk area, situated between Amsterdam and Utrecht. As part of this expansion, the energy supplier is constructing a new high voltage substation. The electrical transformer will be used to convert electricity from the national grid into the regional grid.

En route to its new destination, the transformer had to pass over both the railway from Amsterdam to Utrecht and the A2 freeway between these two cities. Mammoet came up with a two-phase plan that reduced delays for travellers as much as possible.

The first phase was executed during the weekend of September 24. The transformer was shipped to the Amsterdam-Rhine Channel next to the railway and freeway from Amsterdam to Utrecht. It was lifted from the inland vessel and positioned behind the channel dike by two floating cranes.

From there, a Mammoet crawler crane lifted the transformer over the railway track. This part of the operation was executed between 1 .00am and 5.00am to minimise railway delays.

The transformer was then lifted onto several SPMTs, which drove it across a pasture and onto the freeway.

The second part of the transport took place in the weekend of October 8. The transformer was first transported across the freeway from Utrecht to Amsterdam on SPMTs. It then continued its path to the high voltage substation over the freeway running in the opposite direction.

The electrical transformer is currently positioned next to the high voltage station. It will be installed inside the station once construction of the foundation has been completed.