Now available in North America, the 11-ton Mecalac AS1600 swing loader has the ability to pivot its bucket 90 degrees to either side, representing a departure from traditional wheeled loader design. 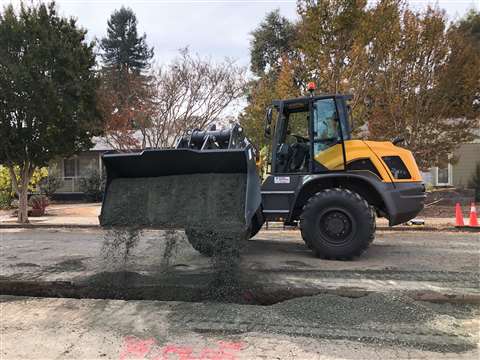 According to the company, the AS1600 - which was launched in Europe in 2015 - is the only wheeled loader in the 11-ton class that offers a load over height of 3.40 m. With a turning radius of only 4.35 m across the rear it is designed for confined worksites.

All models in the Mecalac AS Swing Loader Series have the unique ability to pivot the bucket, as well as a rigid frame and four-wheel steering to provide stability while driving, operating and unloading in various conditions or terrains.

Mecalac claims the AS1600 requires only half the space of conventional loaders for tasks such as loading trucks or discharging materials into trenches with a standard 1.6-cubic-meter bucket.

Space on the jobsite has consistently been a concern in many markets, particularly Europe, and is becoming increasingly important in North America as well.

“Mecalac understands that on today’s crowded jobsites, space management is vital for safety, productivity and efficiency,” said Peter Bigwood, general manager for Mecalac North America. “Contractors are trying to fit all the equipment, vehicles and personnel they need into a very limited space, leading to congestion and sometimes dangerous conditions.”

After loading material, operators can back up, rotating the bucket in the process. Materials can then be discharged over the side while the machine reverses along the trench, streamlining operations and reducing unnecessary downtime, noise and environmental impact, the company claims.

Powered by a water-cooled 100 kW Deutz turbo diesel engine, the AS1600 uses a common rail injection system and electronic engine controller with intelligent link to the traction drive to ensure optimum usage of the engine power paired with low fuel consumption, according to the company.