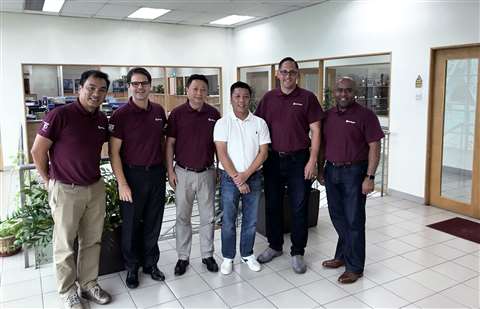 Several of the 100 tonne capacity GMK4100Ls were also delivered in 2017. The latest machines will be delivered in the first quarter of 2019.

Tan Cheng Guan, executive director at PT SH’s Singapore-based parent company Sin Heng Heavy Machinery, ordered the cranes during a visit by senior Manitowoc executives. “Grove cranes are easier to manoeuvre and set up thanks to features such as their Megatrak suspension and Megaform boom, with its Twin-Lock pinning system,” he said. “This makes them particularly well-suited to Indonesia’s fast-growing economy with its increasingly congested cities.”

“PT SH is an important partner for us,” said Wang. “We are pleased the company is developing its fleet of long-boom cranes for trading in Indonesia and Singapore. The company’s commitment to Grove cranes is a testament to the quality of our machines and the trust our customers have in them.”