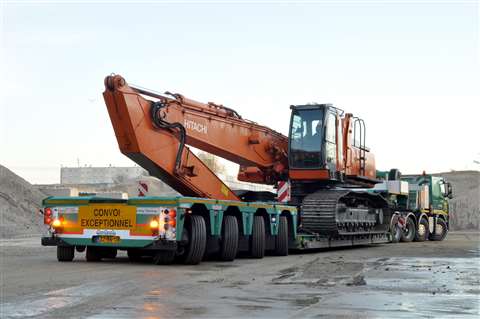 Ten years of judicial wrangling over the Nooteboom Pendle-X Euro low-loader with excavator trough have finally been decided in Nooteboom’s favour by the European Patent Office.

The judgment confirms that the combination of an excavator trough and pendle axles is unique and Nooteboom is the only party in Europe that can bring this product to the market.

“This has ended a long period of uncertainty,” said Nooteboom manager Toon de Smit, who is responsible for patent applications. “While we were filing our application for the patent in 2005 we were already challenged: the low-loader with excavator trough was not thought to be unique and, according to our competitors, we could therefore not apply for a patent.

“The principle of an excavator trough and the concept of pendle axles have indeed been around for a while. But it’s the combination of the two that is in fact unique and has not been seen before and this is what the Appeal Board of the European Patent Office pointed out in their verdict. This is a real boost for us; it proves that we really are trendsetters when it comes to innovation.”

Toon de Smit added, “Nooteboom is active in a niche market with only a limited number of manufacturers who are predominantly based in this part of Europe. In the countries where we are particularly active we often choose to invest in a patent to make sure we have the best possible protection.

“If other people’s inventions are copied with impunity, it kills off innovation; if parties like Nooteboom cannot recoup their R&D investments it doesn’t bode well for the innovative climate in the sector and for the customers. Nooteboom will therefore do all they can to protect their intellectual properties and is heartened by the ruling of the European Patent Office.”