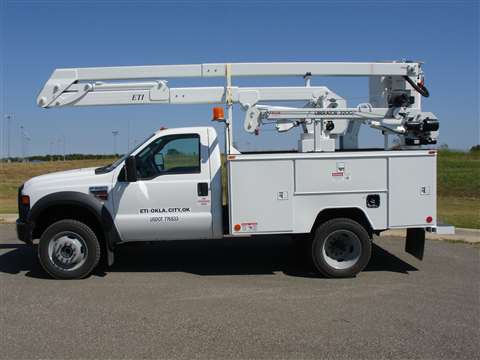 The past 12 months has seen a number of European-built high reach aerial platforms enter the US market to be used in wind turbine construction and maintenance work, including Bronto Skylift and Ruthmann models. Some of these machines have maximum working heights exceeding 300 feet.

Palfinger recently acquired Wumag, a German truck mounted platform specialist and one of the European specialists in very high reach machines - like Bronto and Ruthmann, it makes models that go all the way up to 300 feet and more.

Both companies stand to fare well from the deal. Chris Neuberger, president of ETI, says Palfinger is a "worldwide, well-known and highly capable manufacturing company" that will get a firmer grasp of US soil - offering locally built products - while ETI will benefit from Palfinger's worldwide distribution.

For ETI, meanwhile, Palfinger gives it an outlet to the big European utility lift market (where fellow US manufacturer Time Manufacturing has long been a strong competitor).

Neunberger plays down the prospect of quickly importing larger boom trucks from Palfinger, and also says the ETI customers will not notice any big differences any time soon. "There will be no people changes, no facility changes, nothing," he says. In fact, he says ETI has no plans whatsoever to bring in the larger Palfinger Platform units.

"ETI did a great job developing and manufacturing product," says Neuberger, "but if you look at the opportunity that we could do together with [Palfinger's] manufacturing expertise and our marketing and sales expertise, in the long-term there's going to be an opportunity to grow the ETI brand."

ETI, previously a family owned operation in the Southwest, was originally founded as a bucket truck manufacturer, plain and simple. "We entered the market building bodies," says Neuberger.

"After product consolidations, the business took a turn in the 1990s and started building aerial devices. "As we built product and developed additional product, we then reached out on a national basis."

And further expanding its nationwide network of independent service outlets, ETI purchased crane manufacturer Ideal Crane in 2007. The Palfinger news is the biggest yet.

Palfinger says the previous ETI owners will retain a significant stake in the business and will continue to run the division under the ETI name. "We have known ETI for a long time and are excited that the company is becoming part of the Palfinger Group," says Herbert Ortner, chief executive officer of Palfinger AG.

"ETI allows us to realize our strategy of becoming a truly local player in one of our strategic core business segments."

With 2009 revenues of $45 million, and 190 employees under its belt, ETI is poised to continue growing - but don't expect too many changes, if any, in the coming year.

"It was just an opportunity that we think by combining forces, that we have more to gain in the future on a combined platform than we do singularly," he says.