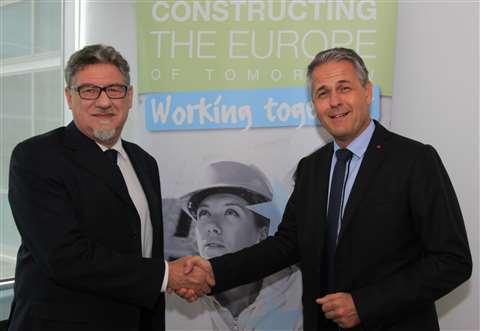 Enrico Prandini has taken over as the new president of CECE (the Committee for European Construction Equipment), having been first vice president and succeeding Bernd Holz.

The CECE presidency is a rotating post held for two consecutive years by each of the associations representing their member nations.

Prandini, who took over the presidency on 1 January, is managing director of Komatsu Italia Manufacturing, one of Komatsu’s global officers, and vice president of the Italian Construction Equipment Association (UNACEA).

He has been with Komatsu for 27 years. Today, Komatsu Italia Manufacturing in Este designs, manufactures and distributes earthmoving machines from 1 to 17 tonnes.

Prandini intends pushing ahead with the long-term strategy of his predecessors at CECE, with one of the main goals for his presidency to be to build customer loyalty through a common vision. This was agreed on during the CECE Summit last year as one of the key success factors for the industry to be competitive and future-proof.

The Summit recognised that technological change, the skills shortage and challenges rising from digital construction needed to be tackled together along the value chain.

Prandini said, “In the coming years, we want to create more dialogue opportunities with value chain representatives in Brussels.”

Said to be the first event of its kind, this workshop has been endorsed by the European Commission as an official event of the 2018 EU Industry Days.

Prandini said, “Together with the construction industry we will be organising a digital construction seminar and invite all parties interested in the subject of digitization to attend.”

Co-operation along the value chain will also be the theme of this year’s CECE Congress, which will be held in Rome from October 17 to 19, 2018.

Prandini said he believed that CECE should also focus on two other priorities during his presidency – continuing on CECE’s path of further fostering visibility and political recognition for the construction equipment sector.

This was said to be especially important in view of the forthcoming European elections in spring 2019, and the nomination of the new European Commission.

“In this framework, we should seize the opportunity to gain more attention and impact,” Prandini said.

He also wants to continue to keep an eye on the European Single market.

“We will keep on promoting the idea of fair competition and free trade for all market players in Europe”, he said. “What we have to avoid is non-needed complexity in laws and regulations.”

As president, Prandini represents 1,200 construction equipment manufacturers in Europe. They generate €40 billion in annual revenue and employ around 300,000 people overall.

A video interview with Prandini can be found on the KHL video pages.