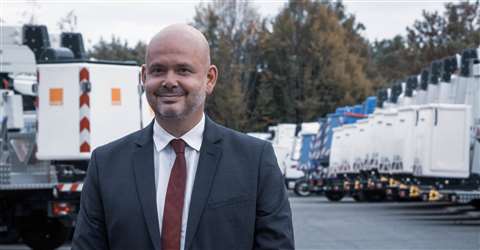 Founded in 2001 by Bourrellis and headquartered in Ferrières-en-Brie, France, Klubb started life as a distributor for Versalift in France. Since stepping out in 2015 as a manufacturer of its own vehicle mounted platforms, the company has experienced strong growth.

This includes a range of products mounted on vans, trucks, chassis and pick-ups, serving the telecom and electric networks sectors, along with other special applications, such as firefighting equipment.

Klubb offers around 60 models, produced at five assembly sites and has taken an eco-friendly approach, notably thanks to its Green Pack technology, meaning platforms can be used with the vehicle’s engine turned off to save fuel and limit their environmental impact. In addition, the group offers a complementary range of services.

Since its move to manufacturing, the company has made two acquisitions to strengthen its European footprint, notably its distribution subsidiary in the UK, CPL. The group said it plans to accelerate its mergers and acquisition (M&A) strategy with the integration of other European players.

Operating in France, the UK and internationally through its distribution network, covering 40 countries, Klubb has an annual turnover of €120 million, with more than 400 employees.

Backed by its new shareholder, the group intends to consolidate its European leadership and develop its international footprint, in particular by diversifying its product range, for example for short term rental companies, said the company. It also plans to strengthen its geographical coverage through organic growth and targeted acquisitions.

The financial resources of its new shareholder and the strength of its existing finance agreements, means the group has sizeable acquisition capacity, the company added.

Julien Bourrellis, CEO of Klubb Group, said, “I am convinced that Andera is the ideal partner to further accelerate our development, as the organization and investment philosophy of Andera MidCap are fully in line with our international ambitions.”

Antoine Le Bourgeois and Sylvain Charignon, partners of Andera Partners, added, “We are very proud to support Julien Bourrellis and his management team for their new ambitious growth plan. Klubb group perfectly illustrates Andera Midcap’s investment strategy: a seasoned and ambitious management team that is successfully carrying out the change of scale of their group both in France and internationally, and a group whose industrial know-how and service offering are recognized and valued by its customers.”