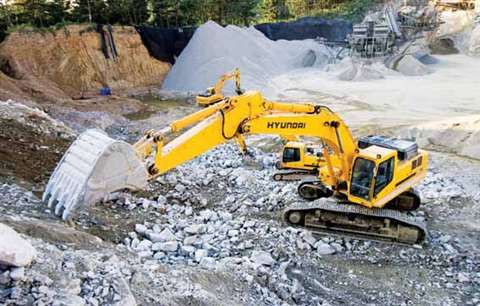 While not the biggest trade show in the world, Hillhead 2007, will come as a refreshing experience for those who attended the sprawling magnificence of Bauma, which is commonly accepted as being the largest. Hillhead's scenic location in the UK's Peak District and its manageable size make the mainly outdoor show a major draw for construction equipment manufacturers and visitors alike, irrespective of the UK's idiosyncratic weather conditions.

This year's show will see over 430 companies taking stands in an exhibition area that totals 85000 m2, including 30000 m2 of demonstration area, of which there will be three separate zones – materials handling, rock processing and recycling.

The recent Bauma Exhibition will have occupied most manufacturers' attention in terms of new equipment, nevertheless, many of the machines that made their worldwide debut in Munich will be making their UK debut at Hillhead.

Elsewhere, and Extec, recently acquired together with Fintec by Sandvik, will present three of its Bauma launches – the S-6 doublescreen, the C-10+ jaw crusher and the X44 SBS, I-C13 recirculation system. Two other new products – a crushing solution and a screening solution - will be on show, but true to form Extec is not prepared to release advance information.

Despite being bought by Sandvik, Fintec will be exhibiting separately at Hillhead. On its stand will be the Fintec 1440, the first Fintec machine equipped with an impact crusher. The company will also be showing a redesigned version of its Fintec 1080 track-mounted cone crusher unit. Other machines on display include the Fintec 1107 jaw crusher plant and the Fintec 542 and 640 track-mounted screens.

The 49,9 tonne Fintec 1440 is suitable for secondary or fine crushing of softer rocks or in various demolition and recycling applications and is equipped with a Sandvik PR301D horizontal shaft impact (HSI) crusher with a feed opening of 900 × 1360 mm.

The crusher incorporates a four-hammer rotor – 1,15 m in diameter and 1,33 m wide – and discharges onto a secondary pan feeder. It is also equipped with a primary feeder and a separate two-deck pre-screen, hydraulic folding wing plates, and a Stage IIIA compliant, 330 kW CAT C13 engine. Maximum throughput is 350 tonnes per hour.

Metso Minerals will be showing its new LT60 track-mounted mobile crusher, with a throughput of up to 500 tonnes/hour, together with the ST458 four-way-split mobile screen, making its debut at this year's show, which has a maximum throughput of 400 tonnes/hour.

South African manufacturer of compact mobile crushers, Pilot Crushtec, will be exhibiting its TwisterTrac AC210 mobile vertical-shaft impact (VSI) crusher and “introducing its latest product developments”, more details of which will be available at the show. According to the company, the TwisterTrac is the only diesel-hydraulically driven tracked VSI crusher in the world.

Rubble Master will have all four models from its range of compact tracked crushers on show at Hillhead. A new RM100, launched at the end of last year, and an RM70 will be working in the demonstration area, while an RM60 and a RM80 will be on the company's stand.

US-based Screen Machine's UK dealer CGCS Midlands will be exhibiting two heavy duty screening plants the Scalper 55C and the Might II. Further information on both machines, and other products from the company will be available at the show.

Terex Pegson will be showing its 1412 Trackpactor Underpan Feeder, which has been developed specifically to give high reduction and throughput capabilities on construction and demolition waste applications containing high proportions of steel. Maximum capacity is 300 to 500 tonnes per hour, depending on material.

The underpan feeder prolongs belt life and eliminates the need for additional preparation of the feed material, according to the company, because material impacts onto the underpan feeder, not directly on to the conveyor, avoiding belt damage and downtime. The conveyor belt assembly can pivot from 17° to 23°.

The recent introduction of new European Stage IIIA engine laws for 19 to 37 and 75 to 130 kW diesel engines led to a plethora of new compact equipment and mid-sized earthmoving machines from the major manufacturers – Caterpillar, Hyundai, Volvo, JCB, etc – at Bauma. And many of these machines will be on show at Hillhead.

However, pride of place on the Case strand will go to the first European appearance of the latest 300 ADTs, which have now gained CE certification. Also on show will be the latest E Series wheeled loaders, the 921E, 821E and 721E, as well as models from its new CX range of excavators.

Caterpillar dealer Finning will be showing a range of machines at the show, from the new 908H compact wheeled loader, to the large 770, 772 off-highway rigid dump trucks featuring their new centre-mounted cabs. Also on show will be the new 775F-Series off-highway truck, 730 ejector articulated truck, C-Series excavators and re-handling equipment.

There will also be a dedicated customer support area featuring information about Finning's service capabilities, such as undercarriage management, increasing the life of ground engaging tools while improving productivity, repair and maintenance options, customer support agreements and contamination control.

Finning's specialist rebuild team will also be on hand demonstrating the Caterpillar Certified Rebuild capability with the display of a customer 988F that has been upgraded to “the highest specification available”.

Doosan Infracore will be showing representative models from its range of DX crawler excavators. The 17,5 tonne DX180LC, 21,5 tonne DX225LC and 242,6 tonne DX255LC were all new at Bauma, so it seems reasonable to expect one of these machines to be at Hillhead. At the other end of the scale the company is also promising to show its new DX35Z zero tail swing mini excavator. The 3,65 tonne machine has a maximum digging depth of 4,8 m.

New wheeled loaders will also be represented, with one or more of the DX140W, DX160W, DX190W and DX210W – 14,3 to 20,8 tonnes, 99 to 120 kW machines on show. All are fitted with Doosan's Stage IIIA compliant 6-cylinder DL06 engines and ePOS system, which combines information from the engine and hydraulic systems to optimize hydraulic pump management.

First shown to at Bauma, Hyundai's dash-7 excavators and wheeled loaders have been fitted with latest Stage IIIA compliant engines, newly designed dashboard clusters, air suspended seats, and chromium plated bolts. Multi-function joysticks are also new on the excavators, while a reversible cooling fans is new for the wheeled loaders.

Visitors to the show will be able to see the biggest of the new machines – the HL770XTD-7A and HL780-7A wheeled loaders, and the R450LC-7A and R500LC-7A excavators – on the company's stand, with two, as yet unspecified machines, working in the demonstration area.

JCB will use Hillhead to demonstrate its new JZ255 LC excavator, which will be joined by the demolition spec JS260 XD excavator. Also making its UK debut will be a machine from JCB's Robot Series II skid steer range. The new generation of skid steers, including five wheeled and three tracked machines with rated capacities from 630 to 1150 kg, feature redesigned side access to the cab.

Also in the demonstration area will be the HT (high torque) models of its 436 and 456 wheeled loaders, which, according to the company boast more sophisticated operation, a larger field of vision, an enhanced operator environment and greater performance and serviceability than previously.

On the stand will be representative models from JCB's JS Auto range – the 22-tonne Stage IIIA JS220 excavator, and a JS460 with 24 m long boom, which at 46 tonnes is the largest machine in the range.

Other machines on static display include the JCB 456 wheeled loader, the JCB 722 articulated dump truck, and the Groundhog utility vehicle.

Kubota will be showing a “selected range” of mini excavators at the show, including the new 8 tonne KX080-3. The machine offers comprehensive state-of-the-art technology as standard, according to the company, with “outstanding” performance and “exceptional” safety, durability, reliability, versatility and comfort, together with low running costs and ease of servicing.

Owners and hirers will also benefit from the unique key-based ‘Anti-theft' security system, which is now fitted as standard on all models from 1,5 to 8 tonnes.

Making their UK debut on Liebherr's stand will be four new machines, including the R 964C Litronic excavator, which weighs 65,7 to 76,9 tonnes depending on configuration. Features include improved performance, greater power output, improved stability and an improved operators cab.

Also on show will be the PR 764, which at 52,5 tonnes is the world's largest fully hydrostatic bulldozer, the new L 586 wheeled loader, the largest of its 16 models with an operating weight of 31,4 tonnes, and the Compactmix 1.0 concrete batching plant, which has a production capacity of 60 m3 per hour.

Another UK debut, and certainly one of the most impressive sites at the show, will be MarubeniKomatsu's D51-22 bulldozer. The D51-22, with its a super-slant nose design, offers operators unprecedented visibility of the work equipment. Komatsu will also be showing a new 91-tonne capacity rigid dumptruck, the HD785-7, which is said to offer best-in-class engine power and brake retardation, as well as excellent fuel efficiency. Also on display will be new additions to the Dash-8 crawler excavator range and Dash-6 wheel loader line-up.

Star of the show on Volvo's stand will be its 70 tonne EC700B tracked excavator. The machine is equipped with the largest-capacity engine in its class, the Stage IIIA compliant 346 kW Volvo D16C EAE3, which uses the company's V-ACT (Volvo Advanced Combustion Technology) system. Maximum digging depth is 8,4 m, while maximum reach is 13,1 m.

Also on the stand will be its new BL61 Plus (68 kW) and BL71 (75 kW) Plus Backhoe Loaders. These will be joined by representative machines from the company's C Series excavators – the wheeled, 106 kW, 17,7 tonne EW160C, and the tracked 110 kW, 21,7 to 23,4 tonne EC210C, while visitors will be able to inspect the A40E FS and observe the A35E articulated haulers at work in the demonstration zone at this year's event.

From the ECR range of short swing radius compact excavators, new ECR58 Plus and ECR88 Plus will be on show, as will the L60F, L70F and L90F medium duty general purpose wheeled loaders.

Elsewhere, ITT Flygt will be unveiling its 2600 series of dewatering pumps, which are designed to meet increasingly tough performance and environmental demands. The six-pump 2600 series covers virtually every application for sites of all sizes in quarrying, construction, mining and other tough environments. All models use new corrosion resistant materials and feature Flygt's patented Dura-Spin hydraulic system, with outputs ranging from 0,75 to 18 kW.

Brammer, a UK distributor of industrial maintenance, repair and overhaul products, will be promoting best practice will be a range of products and services demonstrating how it can provide customers with total shaft solutions for industrial fans used in the cement and aggregates industry.

Endress+Hauser will be showing its Soliphant range of vibrating limit level switches, alongside Time of Flight instruments, including the Prosonic M ultrasonic level transmitter and Levelflex M guided radar and Micropilot M free-space radar. Also on the stand will be its new Promag 55S electromagnetic flowmeter.

Also at the show, and Hitachi Automation and specialist systems integrator SCS will be showing a range of products, including variable speed drives, soft starts from the Solcon family, Pujol gearboxes and Gamak Motors, “possibly” all tied together over a Churchill Telemetry system.

Thermo Fisher Scientific Inc will be showing a range of industrial bulk weighing and monitoring products. Making its UK debut will be a 4 m conveyor incorporating the company's belt scale system, an integrator; a tramp metal detector, a flow/no flow switch, and belt misalignment and tilt switches. The Thermo Scientific Spectra-Quad moisture analyser will also be on show, alongside the entry-level Thermo Scientific Ramsey Micro-Tech 11-101F, a mini microprocessor-based instrument developed for industrial applications.

We look forward to meeting you there for what promises to be one of the most enjoyable shows of the year.