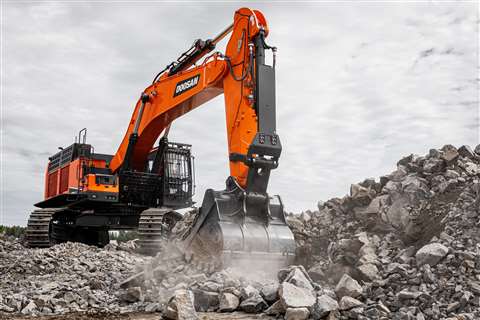 The DX800LC-7, Doosan's largest ever excavator

On the most recent Yellow Table, International Construction’s ranking of the world’s top 50 OEMs by sales, Doosan was ranked as the world’s tenth biggest construction OEM.

In February this year HHH agreed to acquire a 35% stake in in Doosan Infracore for 850 billion won (US$735 million) from its parent company, Doosan Heavy Industries & Construction Co., which has been looking to sell shares and assets to improve its financial structure and repay debts

The Korea Fair Trade Commission said it has given the green light to the proposed deal as it is not likely to hurt market competition.

The regulator said the approval of the deal will help Doosan Heavy smoothly proceed with its corporate restructuring process and Hyundai Genuine strengthen competitiveness in the construction equipment market in South Korea and abroad.