Savannah's sweet smell of success: JCB in the US 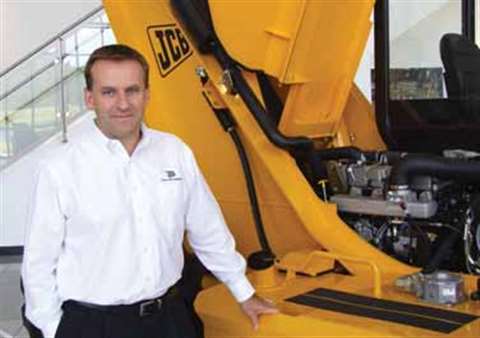 JCB Inc. – The Americas' President Graeme Macdonald stands in front of a Loadall model in the company's North American headquarters in Pooler, GA.

As JCB continues to develop its large facility in Pooler, GA, its President Graeme Macdonald tells ALH about its interest in the South American market as well as comments on the handler market.

Graeme Macdonald, the new president of JCB Inc. – The Americas – successor to Helmut Peters – is off to a good start here in America.

He arrived at a pivotal point in the company's North American operations, as the Loadall line of telehandlers are now manufactured in the Pooler, GA facility, in addition to its skid steer loaders, backhoe loaders, and the new High Mobility Engineer Excavator (HMEE-1) to be used for the United States Military. Currently, he oversees its Pooler location that employs 500 workers, with that figure expected to increase through 2008.

Macdonald can look forward to what looks to be another successful year, his first as president for the US operations. He says as a company, JCB has benefited from growth in the global construction equipment market and says even more so, the company has grown faster than the market. This growth has allowed the company to maintain and increase production volumes at the Pooler facility.

Of particular interest to the company is the growing South American market. Last year, JCB integrated its US, Canadian and South American operations into one. Since that time, Macdonald says the Pooler facility has seen a 62% increase in production with approximately 35% of the machines out of Georgia now being exported, with the majority going to South and Central America.

“It is a huge opportunity for JCB,” Macdonald says, adding that Mexico and South America are using more telehandlers than before.

“The turmoil in the financial sector has had ripple effects throughout the international business community,” says Macdonald when asked about how the business has changed since combining the American units. “One of the changes that has had the most notable effect on JCB The Americas has been the weakening of the dollar. That combined with the down-cycle in the North American market caused us to re-examine the way that we do business. Now that the South American operation has been rolled under the same umbrella, it has allowed us to increase our export business.”

Late last year, the company began manufacturing its Loadall 506C, 506C-HL and 508C models stateside. He says in North America, the telescopic handler market is down 28% this year, but this business segment has been strong for the company largely due to the rental sector. “Machines such as the 506 and the 508 with their jobsite versatility are a great fit for the rental industry,” he says.

If telehandler sales in the US are down 28% (construction equipment as a whole down 14%), he still believes that by late 2008, the handler market will be seeing some improvements. By 2009 or 2010, it will be looking quite healthy again he says.

The outlook for straight mast rough terrain forklifts, however, is not as optimistic. Macdonald says that this sector has declined faster than other products, but says JCB's market share has increased so the effect on its sales has been minimized. “Due to the uncertainty of the housing market it is difficult to see recovery in the short term,” he says.

When asked if JCB would be manufacturing any of the company's UK-made, European-style telehandlers in Pooler, he says no. Nor does the company plan to make aerial platforms, he says.

“JCB The Americas has aggressive plans for growth,” he tells ALH. “North America is the largest market in the world for construction equipment products and while we are number three in the world for equipment manufacturers [in its product sectors], this remains a relatively new and challenging market for us. Our dealer network is the fastest growing in North America and we do plan to continue that growth.”

Technology paves the way for driving 3D development
What is 3D modelling and what is it used for? Discover more at SC&RA Workshop
Latest News