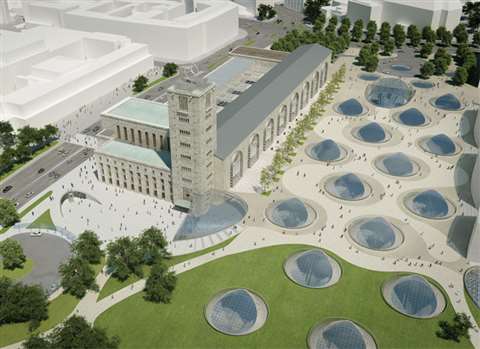 Stuttgart's new underground station will allow the original structure to be retained, while ‘lighting cones’ will allow in natural light.

In broad terms, the plan to extend south western Germany’s high-speed rail link sounds simple. A line from Mannheim to Stuttgart was completed in 1991, and the idea now is to push a further 90 km or so southeast to Ulm. Of course threading new high speed lines into such big urban centres – Stuttgart has more than 600,000 inhabitants and Ulm some 125,000 – is never easy, but the complications in Stuttgart make this an incredibly complex construction project.

The overarching project for Stuttgart is called Stuttgart 21, referencing the 2021 completion date, and it encompasses a lot more than just the high-speed rail link. One of the biggest issues in the city is that the main station is currently a terminus, with the lines facing in completely the wrong direction. Trains currently leave in a north-easterly direction, so not only does the station need to be converted to a through facility, but the tracks need to realigned by 90° to face west towards Mannheim and east to Ulm.

In order to preserve the historic main station building and redevelop the city centre, which is divided by the train tracks, the new station will be built underground with eight through tracks.

According to the project owner, Bahnprojekt Stuttgart-Ulm, which is jointly held by the European Union, the German Federal government, German state rail company Deutsche Bahn, the city of Stuttgart, the greater Stuttgart region and the state of Baden-Wüttemberg, taking the main station underground will free up some 100 Ha of land in the city centre currently taken up by rail lines and yards. This opens up possibilities of urban regeneration, better traffic management and the development of a more viable and environmentally friendly city centre, all of which are elements of the Stuttgart 21 scheme.

In terms of rail infrastructure, in addition to the intercity elements of the project, new urban links will be built to connect Stuttgart’s airport and exhibition ground complex to the city centre. Two further new stations will be built within the city on a rail loop with the central station.

The restructuring of the city’s rail network will entail a total of 57 km of new lines being built, with some 33 km in tunnels. There will be 16 individual tunnels and cuttings, and other major structures include 18 bridges.

Of course tunnelling in an urban environment is a delicate business. The ARGE Tunnel Cannstatt consortium, which comprises Hochtief, Alpine Bau and Wayss & Freytag opted for mechanical excavation for its sections of the project. A spokesman for the group said the relatively short runs and changing cross sections meant tunnel boring machines (TBMs) were not suitable, while the soft ground and urban environment did not point to drill & blast techniques either.

The consortium’s chosen workhorses on project are 44 tonne Liebherr R 944 C Tunnel excavators. The front end of the machines comprise a swivelling arm with double 45° bearings and a 4.5 m telescopic boom and 3.07 m arm. The ground is soft enough to be excavated with a bucket, but the excavators have high-flow hydraulics available to power attachments such as breakers or cutters, if required.

The tunnelling techniques being used follow the general principles of the New Austrian Tunnelling Method (NATM), with a combination of shotcrete, steel mesh and some rock bolting and steel arches being used to stabilise the sides and face. In the ‘Simone’ tunnel under Stuttgart’s Bad Cannstatt district, which iC visited, these methods were achieving progress of some 2.5 m per day, with teams working 24/7 on the project.

Another complication in central Stuttgart is how to cope with all the spoil generated from the excavations? Trucks would be problematic in a city which already has traffic issues, and the environmental impact would be high due to the long haulage distances. To mitigate against this, some areas of the project have been equipped with an elaborate system of overhead conveyors, which removes excavated material without putting more vehicles on the roads.

Outside of the new urban rail connections there are still plenty of construction challenges, partly dictated by Stuttgart’s geography.

The city sits in a bowl carved by the Neckar River, with the main station sitting at some 230 m above sea level. Building the high-speed line out to the east will involve the construction of the 9.5 km Fildertunnel, which will take the line to a maximum elevation of 392 m, some 162 m above the city. Ground breaking on this took place in July, and upon completion it will be the longest double tube rail tunnel in Germany.

In fact, of the 59.6 km of new track being built for the Stuttgart to Ulm high-speed stretch, some 30.4 km will be in tunnels, and there will be five such structures 500 m longer or more. Other significant elements of the scheme include 17 elevated overpasses and an additional 20 road bridges.

The scheme has not been without its controversies. Indeed, the wrangles over funding and alternative schemes, along with various objections, took a good 30 years to resolve between project conception in the early 1980s and ground breaking in 2010.

However, Bahnprojekt Stuttgart-Ulm is keen to stress the benefits it will bring, with greater capacity at Stuttgart station, more destinations for travellers, better connectivity with the airport and shorter travel times between major destinations.