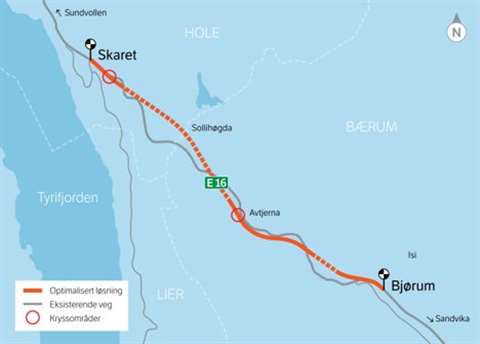 Swedish contractor Skanska has been awarded a NOK3 billion (€283 million) contract to build a major motorway in eastern Norway.

The 8.4km stretch of the proposed four-lane E16 motorway will stretch from Bjørum in Bærum municipality to Skaret in Hole municipality.

In the final round of the procurement process, Skanska – along with its partner Aas-Jakobsen – competed for the contract with Implenia/Multiconsult and AF Gruppen/Norconsult.

The Norwegian Public Roads Administration said it selected Skanska after assessing the tenders against four award criteria: organisation and key personnel; completion of the assignment; progress; and the quality of the facility.

The scope of work awarded to Skanska will include the construction of two tunnels and eight bridges, with the tunnels running to 800m and 3.4km respectively and the longest of the bridges along the route spanning 220m.

The contract calls for excavation, blasting, loading, transportation and disposal of excavated materials. Demolition of existing buildings and the rerouting of in-ground cables and pipes is also required.

During the project, which is due for completion by the summer of 2025, it is anticipated that some 3million m3 of material will be excavated.

Construction work is scheduled to begin in February 2021.